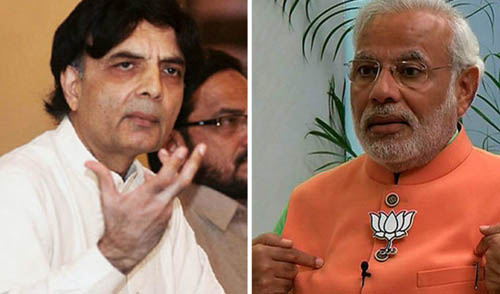 Narendra Modi had said if he wins the elections he would bring fugitive underworld don Dawood Ibrahim to India to be tried for the 1993 blasts in Mumbai. He told a Gujarati news channel on Saturday that the previous administrations had not tried hard enough. Dawood stands convicted in absentia in India for the blasts, together with several Mumbai accomplices. Several pro-Modi analysts, including former diplomats, are showing interest in targeting Pakistan-based clerics and other extremists allegedly involved in terror activities in India.

The BJP leader also criticised Indian Home Minister Sushil Kumar, saying political statements were not necessary for bringing back the Indian don. “Did President Obama hold a press conference regarding US Navy Seals’ operation in Abbottabad for targeting al Qaeda leader Osama bin Laden? … Did he issue any statement or held negotiations with Osama? Modi questioned. Responding to the BJP leader’s criticism, India’s former home minister Chidambaram had said the government cannot send commandos to bring back Ibrahim. “Narendra Modi should first decide where Dawood Ibrahim is living and then he should dream of attacking Pakistan,” Chaudhry Nisar said in a statement issued here on Tuesday.

The interior minister said it seemed that Narendra Modi had not learnt a lesson from his “shameful” actions as the chief minister of Gujrat, which earned him a bad name. He said this statement from an expected Indian prime minister and leader of a major political party was provocative and condemnable showing enmity towards Pakistan. Narendra Modi had crossed all limits in his enmity towards Pakistan and Muslims, and his election as Indian prime minister would destabilize the region, he added.

The interior minister said those, who were levelling charges that Pakistan was sheltering Dawood Ibrahim and thinking to launch an operation on its soil, should know that neither Pakistan was a weak country to be afraid of such threats, nor the nation could be threatened with such irresponsible statements. Chaudhry Nisar said the efforts of the Pakistani government for peace in the region should not be construed as its weakness. Its leadership, people and particularly its armed forces have the right and power to pay back in the same coin, he added. -dawn