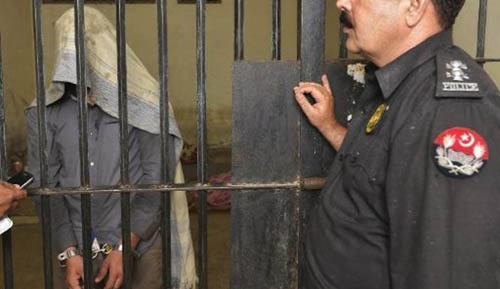 The arrest of a confessed serial killer who used the Internet to lure his victims has caused alarm among gay men and lesbians in Pakistan, where social media has been quietly used to widen freedoms in a country where homosexuality is illegal.

Police officials in the eastern city of Lahore said the man, a paramedic named Muhammad Ejaz, was under arrest on suspicion of killing three men he had met on Manjam, a social networking website for gay men that has thousands of members in Pakistan. Investigators said Mr. Ejaz, 28, had made a full confession since being arrested in a police sting operation last week. He told officers that he had met the victims, including a retired army officer, at their homes, drugged them with sedatives hidden in food and strangled them. News of the arrest caused Manjam to announce on Sunday that it was closing its website to nonmembers in Pakistan until further notice, citing security and privacy concerns.

In an interview Sunday night at the police station where he is being held, Mr. Ejaz confirmed that he had confessed to killing the three men and offered an explanation for his actions. “I tried to convince them to stop their dirty acts, but they would not,” he said. “So I decided to kill them.” He is expected to face full charges in the coming days. Speculation about the murders had been coursing through gay circles in Lahore since mid-March, when the first killing took place. “People are quite frightened,” said one gay man, speaking on the condition of anonymity because of the law against homosexuality.

“They feel both violated and exposed.” Another man said there was speculation that the victims had been picked up on Grindr, another popular social networking website. “Some of my friends deleted their profiles because they were worried,” he said. Mr. Ejaz denied police claims that he had had sex with his victims before killing them, claiming instead that sexual abuse he had suffered as a teenager had driven him to act. While his arrest removed a security worry for some gay men and lesbians, it also raised fears that hostile news media coverage could lead to restrictions on the use of networking sites. “The reporting has a very moralistic tone,” another gay man said.

“They’re talking about how people are being picked up on the Internet as if it’s a new thing. But it’s been going on for years.” Gay men and lesbians occupy a complex place in Pakistani society. Although homosexual acts are outlawed and carry a potential life sentence, prosecutions are rare. Gay men typically hide their sexuality from family members, out of fear of being ostracized. Yet at the same time, they meet openly at private parties and even religious shrines, and some post photographs of themselves on websites like Manjam.

One man told a BBC reporter last year that Pakistan was a “gay man’s paradise.” But these freedoms are exercised within tightly defined limits, and discrimination and prejudice still run deep, particularly for lesbians, because women generally enjoy fewer social freedoms than men in Pakistani society.  One lesbian, writing anonymously in a newspaper blog in 2011, said she felt that she had been treated like a criminal. “You are considered as disgusting as filth, as unnatural as molestation, as uncouth as an animal,” she wrote. Police investigators said they traced Mr. Ejaz using his victims’ mobile phone records and, using a false identity, lured him last week to an apartment in Lahore where he was arrested.

In the interview, Mr. Ejaz said he started browsing social networking sites for gay men this year, after getting an Internet-capable mobile phone. The first victim was the retired military officer, who was in his 50s and lived in an apartment in the city’s garrison area. The two later victims were an information technology worker in his 20s and a student at the Lahore University of Management Sciences, a private college. Mr. Ejaz admitted the murders were “wrong,” but said he wanted to “give a message to these people and to society.” -nytimes