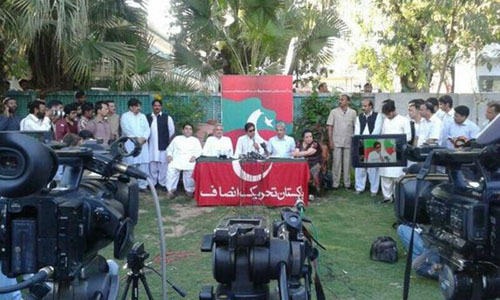 Chief of Pakistan Tehrik-i-Insaf (PTI) Imran Khan on Friday announced that he and his party would boycott Geo and Jang over what he called “the group’s role in rigging” during the national elections held last year.

Addressing a press conference in Islamabad, Khan said the PTI would boycott the media group until it tenders an apology. He said Geo was responsible for airing a victory speech of Nawaz Sharif at a time when the election results had not been fully counted and collated. Earlier, Khan had also alleged that the media group had benefited from “siding with the Pakistan Muslim League – Nawaz Sharif“.  The PTI chief also brought out figures for the election held on NA-118 where he said rigging was done on massive proportions.

Imran Khan said free and fair elections were imperative for democracy, adding that without transparent polls in place, it would not be possible to ensure representative government. Earlier on Wednesday, Khan had said that his party’s scheduled protest on May 11 was solely aimed at seeking justice against rigging in last year’s general elections and would not derail democracy.  However, the party’s plan to launch the protest campaign is being viewed with suspicion by most of the major political parties.

They consider Imran Khan’s decision to launch the campaign against the alleged rigging in the last year’s elections ill-timed and suspect there is a hidden agenda behind it. Reports that Dr Tahirul Qadri’s Pakistan Awami Tehrik (PAT) may join the PTI protest is the main reason for the political parties to believe that Imran Khan is doing this “at the behest of undemocratic forces”. Though some opposition parties, including the PPP and PML-Q, believe that Khan’s complaints about poll rigging are genuine and legitimate, they say the PTI should not go too far in its agitation as it can be detrimental to the democratic set-up and provide an opportunity to undemocratic forces to take advantage of the situation. -dawn