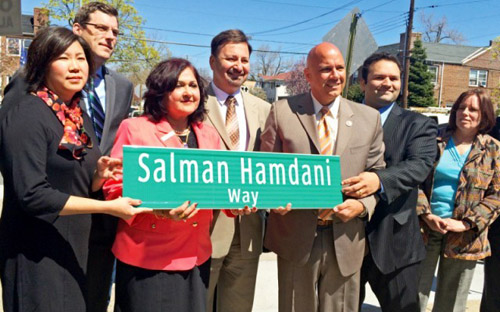 Talat Hamdani is tired, but she still vows to fight on. “Injustice is injustice,” she says in a telephone interview. She stops to catch her breath as she tries not to cry. “The City of New York has disclaimed my son. After a decade-long struggle, her son, a police cadet and a 9/11 hero, Mohammad Salman Hamdani was finally honoured as a street was named after him earlier this week in Bayside, Queens. Mrs Hamdani calls the move “a step in the right direction”.

Salman was a New York Police Department (NYPD) cadet and emergency medical technician who died while helping victims after the World Trade Centre towers were hit “He needs to be officially recognised by the NYPD and by the administration as a cadet who sacrificed his life,” Until March 2002, when his body parts were found at Ground Zero,  Salman Hamdani was mistaken to be a terrorist. “If I hadn’t fought to clear his name, his sacrifice would have been in vain,” his mother says. After the attacks, NYPD announced that their fallen fellow officers would be honoured as streets would be named after them.

But Mrs Hamdani had to apply for the street naming on her own. “I approached the NY Community Board 11, Bayside, last February and told them what had happened.” Earlier, she wrote to the then-NYC Mayor Michael Bloomberg as well as NYPD Commissioner Raymond Kelly, but she did not receive a positive response. The Community Board, however, unanimously approved her application in two weeks. “This wasn’t what I thought my country was about! It’s clearly a mistake,” said Jerry Iannece, chairman of the Community Board at the time. “I was proud to be part of the community that stood up for Salman Hamdani and voted for the street naming.” On whether this was an act of discrimination, he said, “I would not go there, but I would say that the City and NYPD need to get their act together and honour Salman Hamdani,” The next day of the vote, Iannece penned a letter to their local District Councilman, whom he said also moved things “at light’s speed”.

However, it still took former mayor Bloomberg more than a year to sign off. “He signed off naming a street after a Hurricane Sandy victim in less than six months. Why did this take so long?” Mrs Hamdani asked.“This is bigotry of the highest order.” She feels Bloomberg approved the street naming a few days before his term ended, so that current mayor de Blasio could not take credit for it. In 2009, she received word from the National 9/11 Memorial saying Salman Hamdani name will be included but not with those of first responders and NYPD officials. His name was placed on a panel that includes names of those who had nothing to do with the WTC.  “This is prejudice,” she maintains. The NYPD was contacted several times but their public information department did not give a timeframe for a response. Mrs Hamdani wants Mayor de Blasio to acknowledgeSalman Hamdani as an active NYPD cadet and have his name placed under the first responders before this year’s 9/11 anniversary.

She has written to the mayor twice and has received no response. “Naming the street is the beginning of fixing an injustice. This is a turning point in the relationship of Americans and Muslims. This way they can prove that Muslims are an integral part of America’s social fabric,” she concludes. “They need to prove liberty and justice for all. Right now, it is justice for a few.” Recognising Salman Hamdani and his sacrifice can mark the beginning of American Muslims shedding the cross of 9/11. And the only thing the mayor needs to do is sign a piece of paper. -tribune