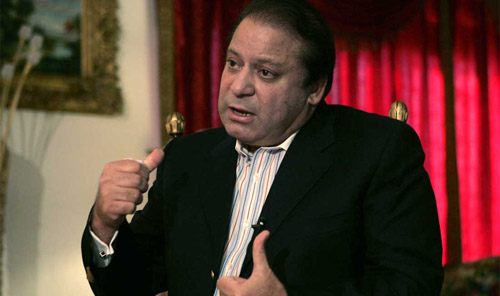 Prime Minister Muhammad Nawaz Sharif on Monday said some elements, unhappy with the Taliban ceasefire were ‘neither our, nor the Tehrik-i-Taliban Pakistan friends’. Talking to BBC, Nawaz said these elements, who were enemies of peace, wanted to deteriorate the affairs.

“These elements carried out attacks at the Islamabad fruit and vegetable market and other places and we are trying to hunt them down.” At the conclusion of his first trip to the UK since assuming the office of the prime minister, Nawaz Sharif told the BBC that the frequency of attacks had gone down in Pakistan but not ceased fully. When asked how the security situation could be improved to attract foreign investment, the prime minister responded that the security problem had been continuing since 9/11.

“This problem has been lingering on since the country had dictatorship. Had there not been martial laws, the security problem would not have emerged in the country. During democracy, the country has never had a security problem.” On extremism, Nawaz Sharif said the martial law administrators pushed the politicians to the wall and built relations with elements that had no relations with democracy. “The result of this practice is what we are witnessing today. These are our own mistakes; this is the product of our own sins.”

He further said: “Wounds were inflicted on Balochistan. We all know how Nawab Akbar Bugti was assassinated and then buried in the presence of a few people. Nobody has forgotten these scenes. I too feel the pain of the Baloch people.” He said the government, the armed forces and intelligence agencies were making progress on the issue of security. “Our first priority is to resolve this problem through talks. Talks are on. Progress in talks is less than our expectations but if we achieve peace without any more bloodshed, nothing is more desirable than that.”

Regarding a recent statement of the army chief, Nawaz Sharif said he was right in saying that the Constitution was supreme and everybody should respect it. “Many misconceptions have been cleared after this statement of the army chief,” he added. Asked that while the PPP and other parties say they would support democracy, voices are raised throughout the country when a journalist points a finger at a state institution, Nawaz said: “I do not think that we should hold somebody responsible for it at once. Speculations should not be made unless the facts come forward. We should wait for the findings of the judicial commission on Hamid Mir attack, which will ascertain responsibility.” –thenews