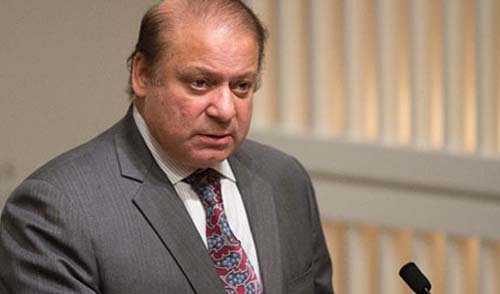 Power shortfall is turning out to be political albatross for the PML-N government. Perhaps realising this, Prime Minister Nawaz Sharif went into a huddle again on Wednesday to look for ways of generating and adding more electricity to the national grid.

He took people running the power ministry to task for increases in the hours of loadshedding, an insider told,  Mr Sharif and Punjab Chief Minister Shahbaz Sharif, who also attended the meeting, were furious when they were informed that shortage of fuel supply to power generation companies had caused the sudden shortfall in electricity. They called for immediate action against those responsible for the lapse. “Not happy with the running of the ministry of water and power, the prime minister has virtually taken it over and wants daily reports on fuel supply to generation companies, process of recovery of dues and other issues related to load shedding,” the source said.

A visibly annoyed prime minister Nawaz Sharif asked the participants if they were genuinely interested in ending load shedding. “I don’t need encouraging estimates but actual improvement on the ground. People are least interested in knowing about the percentage of electricity shortfall as compared to last year, they want minimum hours of load shedding,” he was quoted as saying. To check pilferage of oil being supplied to generation companies, he directed Railway Minister Khawaja Saad Rafique, who had been specially invited to the meeting, to use freight trains for transporting oil from Karachi. Minister for Petroleum and Natural Resources Shahid Khaqan Abbasi agreed that the move would help curtail theft.

Everybody concerned with the matters relating to electricity and management of loadshedding attended the meeting, including Minister of State for Water and Power Abid Sher Ali, Minister of State for Petroleum and Natural Resources Jam Kamal Khan, Special Assistant to Prime Minister Dr Musadiq Malik and senior officials. Minister for Water and Power Khawaja Asif is not in the country these days. With temperature exceeding 40 degree Celsius in several areas, demonstrations were held in different parts of the country last week against unscheduled and prolonged outages.

So far the PML-N leadership, which won general elections on the promise of ending load shedding within months after coming to power, could only be heard requesting the people to be patient. Though Pakistan Tehreek-i-Insaf chief Imran Khan is launching a movement against alleged incidents of election rigging on May 11, he will surely be criticising the government for its failure to end or at least contain load shedding. According to the insider, the meeting also discussed recovery of power dues from the provinces. Some provinces are said to be seeking to reconcile their electricity dues against other heads, some are playing politics when pressed for the payment. Mr Sharif asked Abid Sher Ali to go ahead with his recovery drive but advised him to be careful and avoid getting involved in political bickering.

The prime minister’s office said in a statement that the meeting was informed that an additional 1,000MW would be available from hydel sources on May 11 and 3,500MW would be added to the national grid from the same sources by the end of the month. Another 630MW would be added to the system with additional fuel supply to Muzaffargarh and Jamshoro power plants. The prime minister directed the authorities concerned to reactivate dormant power stations. He asked the ministries of finance, petroleum and natural resources and water and power to ensure that the issue of fuel shortage was resolved in a few days and hoped that the outages would soon be significantly brought down. -dawn