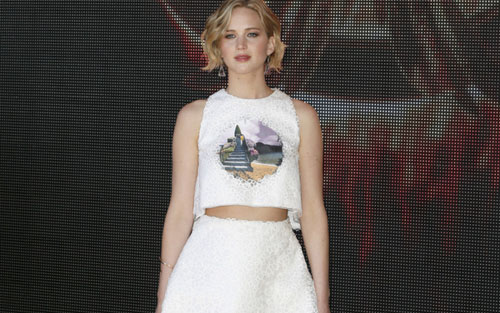 After taking a small break from Dior, Jennifer Lawrence went back to representing the French fashion house at three events during the 2014 Cannes Film Festival this weekend.

On Saturday, the 23-year-old Oscar-winner was seen taking a stroll in a colourful Christian Dior Resort 2014 dress, before kicking off promotion for “The Hunger Games: Mockingjay Part 1” wearing a Dior Couture crop top and A-line skirt.

However it was her evening-wear that really stood out: first, a black Christian Dior silk jumpsuit with a gold belt and a plunging neckline at the Vanity Fair and Armani party and then a cleavage-baring black chiffon Dior dress over a blue mini-dress at

“The Hunger Games: Mockingjay Part 1” party. All this while sporting her sexy bob (side-swept and wavy), which she has been growing out since cutting her hair into a pixie cut last year.