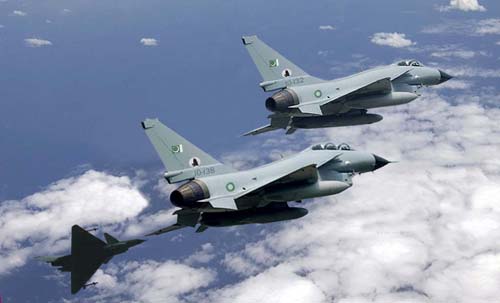 At least 60 hardcore terrorists, including local and foreign commanders, were killed and 30 other injured as Pakistan Air Force jets pounded Taliban hideouts in North Waziristan Agency (NWA), military said on Wednesday, while at least 11 terrorists were killed and four security personnel martyred in an exchange of fire.

“On confirmed intelligence reports, airstrikes were carried out on terrorist hideouts in North Waziristan Agency this morning,” ISPR said in a statement. “As per reports so far, 60 hardcore terrorists including some of the important commanders and foreigners were also killed in the strikes and around 30 were injured. Huge cache of arms and ammunition including IED making explosive material has also been destroyed in the strikes,” it added. Meanwhile, 11 terrorists were killed and four security personnel martyred in an encounter in Mirali, NWA. in the afternoon, ISPR said.

The military said a large number of civilians and security forces’ personnel were martyred in various IED blasts and suicide attacks in FATA, KP and Karachi in the last few weeks. The terrorists targeted in the airstrikes were linked to these bomb and suicide attacks in different parts of country. “Intelligence reports and other investigations confirmed the linkage of these terrorist acts with terrorists targeted who were hiding in North Waziristan Agency,” the statement said. According to military sources, two of the commanders killed in the strikes in villages of Miranshah and Mir Ali subdivisions were identified as Toor Wali and Zamurd Jahan.

Both are believed to be close associates of TTP commander Jehadyar Mehsud, who was also killed in an airstrike this February. On February 20, at least five top TTP commanders – Jihadyar Mehsud, Sailab Wazir, Abdul Razzaq Wazir, Abdul Sattar Khan and Mahmood Khurasani – were killed in army airstrikes. Talking to Daily Times by phone, NWA Political Agent Siraj Khan said round-the-clock curfew has been imposed across the tribal agency. “The security forces have launched successful strikes on the terrorist hideouts. The curfew has been imposed because search operations are underway. -dailytimes