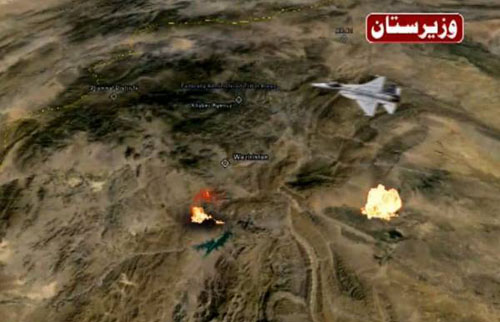 Pakistani fighter jets resumed air strikes in North Waziristan on Monday, a day after the army announced the start of a major military operation to flush out al Qaeda-linked insurgents from the volatile region bordering Afghanistan.

Military sources said combat aircraft pounded targets in the region’s Shawal sector, killing at least 21 militants. Independent confirmation or other details were not immediately available. On Sunday, Pakistan sent troops, artillery and helicopter gunships to North Waziristan in a long-expected military operation seen as a response to a deadly insurgent attack on its biggest airport a week ago. The Taliban and ethnic Uzbek fighters holed up in North Waziristan – home to some of Pakistan’s most feared militants and al Qaeda commanders – have both claimed responsibility for the June 8 commando-style attack on Karachi airport.

The brazen assault all but destroyed prospects of peace talks with the militants, who are fighting to topple the Pakistani government and impose a strict Sharia-based theocracy in the nuclear-armed nation. Prime Minister Nawaz Sharif, who preferred peace talks, has been under pressure from the army and the United States to start the operation in North Waziristan, part of the largely lawless tribal areas bordering Afghanistan. – REUTERS