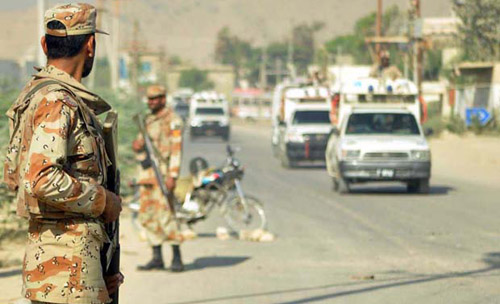 A militant commander was killed in an exchange of fire with the Pakistan Rangers Sindh in the early hours of Wednesday in Musharraf Colony area of Mauripur, said the paramilitary force.

According to the Rangers, the slain militant was affiliated with Tehreek-e-Taliban Pakistan’s Maulvi Khalid group and accused of killing 15 to 20 Pakistan army jawans. A spokesman for the Rangers said a hit list was also recovered from the possession of the slain militant , carrying names of several politicians including MQM’s Farooq Sattar, Hyder Abbas Rizvi, Awami National Party leader Bashir Jan and former PPP senator Faisal Raza Abidi. A hand grenade and a sub machine gun were also recovered from the accused. -thenews