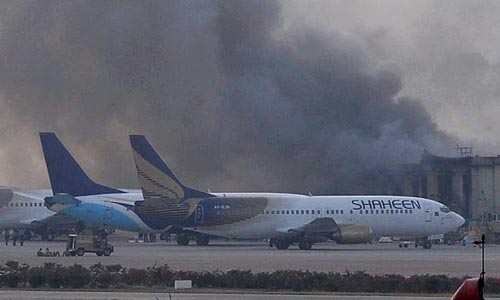 Unidentified gunmen late on Tuesday night opened fire on a passenger plane landing at Peshawar’s Bacha Khan airport, killing a woman and injuring two flight stewards on board. The Pakistan International Airlines (PIA) Boeing PK-756, with 196 passengers on board, was arriving from Riyadh when it was fired upon.

The firing injured three people including two flight stewards and a woman, who later succumbed to her wounds. The plane was hit by six bullets, police said, killing the woman and narrowly missing the captain. At least one bullet struck the plane’s engine, they added. The woman’s daughter was sitting next to her when she was shot in the head, PIA official Mohammad Kifayatullah Khan told Reuters. “When I went inside the plane, I saw the woman lying on the seat and her nine-year-old daughter was crying, ‘My mother is dead, my mother is dead’,” said Khan. “All the passengers were panicked. Some of them wanted to get out as soon as possible because they were afraid of fire inside the plane.”

Police and security forces have cordoned off the airport premises and launched a search operation to arrest the culprits behind the incident. Injured flight stewards, identified as Majid and Ijaz Chaudhry have been shifted to Combined Military Hospital (CMH). Police officials and PIA spokesman Mashood Tajwar have confirmed the incident and the casualties. Khyber Pakhtunkhwa Information Minister Shah Farman told DawnNews that it was difficult to ascertain as to which direction the aircraft was fired upon. He said that firing incidents like this are “a usual occurrence in the area”. dawn

Firing on passenger plane at Peshawar airport by thetimesofpakistan