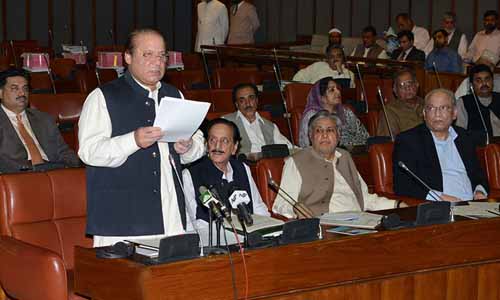 The Senate is all set to pass the Protection of Pakistan Bill on Monday after the government and opposition managed to reach a consensus on the amended draft last week, Dawn has learnt. The bill, seeking “to provide for protection against waging of war against Pakistan and the prevention of acts threatening the security of Pakistan”, was passed unanimously by the Senate Standing Committee on Interior on June 25.

The bill is on the agenda for the first day of its sitting, even though it is technically private members’ day in the upper house. The passage of the bill has become possible following the government’s acceptance of more than a dozen opposition-proposed amendments to the draft that had already been passed by the National Assembly. Its inclusion in the agenda on private members’ day suggests that the Senate’s approval will be a mere formality. The government has agreed to reduce the period of the law’s enforcement from three to two years.

An important amendment approved by the Senate committee is that the order to shoot a person on suspicion should come only from a law-enforcement agency official or a police officer of grade 15 or above. The approved draft also includes an important amendment that binds the government to order a judicial inquiry, instead of a departmental inquiry, in case a law-enforcement official opens fire on suspected terrorists.  After its passage from the Senate, the bill will go to the National Assembly again for approval. A session has already been called on July 2. The new draft defines a militant as a “state enemy” and anyone found sheltering the enemy would also be considered an enemy.

Under the new law, convicted individuals would now also have the right to appeal their convictions before a high court. In an earlier draft, convictions could only be appealed before the Supreme Court. The Protection of Pakistan Ordinance (PPO) had already completed its extended life earlier this month after the government’s failure to get it through the Senate to make it an act of parliament within the constitutional time-limit. The PPO 2013 had been promulgated by President Mamnoon Hussain in October last year. Later, the president issued another ordinance seeking amendments to the original PPO, in January this year. -dawn