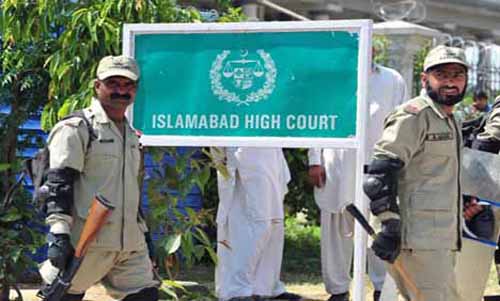 Justice Noorul Haq N. Qureshi of the Islamabad High Court issued on Monday notices to the military authorities on identical petitions filed by directors of two companies supplying helicopters to the army against the latter’s decision to blacklist them. The army authorities had on May 26, 2012, blacklisted for security reasons Aerotron Private Ltd and Aerotron FZE (AF) which had been supplying Bell and Sikorsky helicopters to the army for over 38 years.

In January this year, they blacklisted Aerotron managing director Azhar Wali Mohammad, directors Fawad Ali Azhar, Nausheen Azhar Wali Mohammad and Farnaz Raheel for allegedly leaking sensitive information to foreigners. The petitioners cited as respondents secretaries to the prime minister, cabinet, defence and defence production, Chief of General Staff, director general Military Intelligence, General Officer Commanding Army Aviation at West ridge and director general procurement of the army. The court sought comments from the respondents and adjourned the hearing to a date to be fixed by the registrar office.

The petitioners’ counsel informed the court that the military authorities had summoned them in December last year before blacklisting. The managing director was abroad and it had been duly conveyed to the authorities, but they blacklisted the four directors. The petitioners requested the court to declare illegal the Jan 24 army letter blacklisting them.  In September 2012, the directors had also challenged the May 26 letter by the army authorities in which Aerotron Private Ltd and Aerotron FZE had been blacklisted. But Justice Qureshi dismissed the petitions on Nov 28 last year and observed that the companies should have agitated against their principals Bell/VTIO (helicopters) who, on the basis of correspondence of the military authorities, had discontinued the agreement.  -dawn