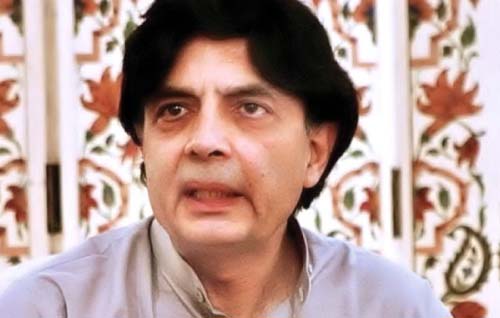 A group of PML-N parliamentarians failed to bring round estranged senior party leader and Interior Minister Ch Nisar Ali Khan, who considers his differences with party chief based on principles. Ch Nisar was in political hibernation for past few weeks, ostensibly due to his heart ailment but actually he had developed some serious differences with the party high command on host of issues and there was a general impression of his being ignored and sidelined.

Sources in the party and discussion with some of the parliamentarians close to the interior minister revealed that a group within the party is continuously whispering in the ears of Premier Nawaz Sharif against Nisar that how he had invited troubles for the party on many an occasions in the past. Some of the people belonging to this group, commonly known in the party as ‘Lahori-Kashmiri Group’, who are also cabinet members, are not even at talking terms with Ch Nisar, who too has a very strong lobby within the party. Sources said that around 45 parliamentarians including a few ministers and National Assembly Deputy Speaker Murtaza Javid Satti met him at Punjab House but even after a couple of hours’ persuasion they failed to convince him to shun his differences with the party leadership.
Some moving scenes were also witnessed during the meeting when some of the MPs belonging to Potohar region said that their politics is with him and they would also quit politics if he (Nisar) refused to become active in politics. Sources aware of the deliberations of the meeting said that Ch Nisar Ali Khan said that he considered party as his family and never thought of quitting it and he thanked all the MPs for showing their concern for him. A party MNA, who was also part of the delegation, said that Nisar has made it clear that he would not leave the party. Sources in the party said that the main differences of Ch Nisar Ali Khan started with the party leadership mainly on the issue of Gen (r) Pervez Musharraf’s case, wherein his advice was altogether ignored and Kh Asif and some other cabinet members prevailed upon Premier Sharif. The opponents of Nisar are continuously pouring venom in the ears of the Premier against him and finally they managed to create chasm between the two, a loyalist of Nisar in the party commented.
Party sources said that the tension between Nisar and party leadership was simmering for quite some time and finally the keeping aside of the interior minister on the matter of military operation in North Waziristan proved to be a proverbial triggering point. Sources close to Ch Nisar Khan also have some serious reservations over extra softness shown by the party leadership toward Pakistan People’s Party as Nisar considered PPP arch rival of PML-N which could ditch them at any moment. The extensive interaction of interior minister with military leadership also become the reason of tiff and even Punjab Chief Minister Shahbaz Sharif failed to bridge the differences between the Chaudhry from Chakari with his elder brother Nawaz Sharif. Sources in the party said that Shahbaz had held a few meetings with Nisar in the last couple of weeks, but he failed to settle the matter.

CM Shahbaz Sharif is due in federal capital today (Thursday) and he would be meeting with Prime Minister Nawaz Sharif and his buddy Ch Nisar Ali Khan as well. The party leaders were confident that the differences between the two would get resolved in Thursday’s meeting and hopefully in next couple of days, Nawaz Sharif would also be meeting Nisar to allay his concerns and remove some misconceptions which led to these differences. In the past, Ch Nisar Ali Khan had developed some serious differences with Nawaz Sharif during the PPP government too when he was Leader of Opposition in the National Assembly. That time also Nisar kept silent and even left the country and it was Shahbaz Sharif then as well who brought him back from London and played a key role in thrashing out misunderstanding between the two. -nation

Tokyo Stocks Slip by the Break

Tokyo Stocks Slip by the Break