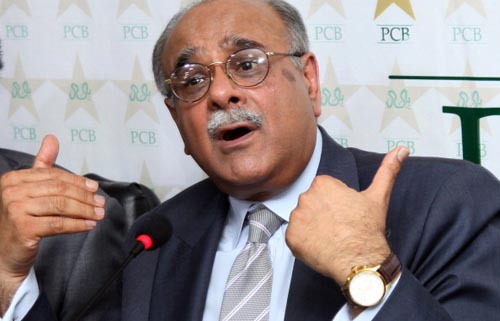 Pakistan Tehreek-e-Insaf (PTI) has called for resignation of Pakistan Cricket Board (PCB) chief, Najam Sethi over his role in alleged rigging in last year’s general elections. In a statement, PTI spokesperson Shireen Mazari said Sethi was made cricket board chairman by Prime Minister Nawaz Sharif “as a reward for fixing 35 punctures.”

Imran Khan’s PTI accuses Sethi of changing election results of 35 constituencies in Punjab in favour of the ruling PML-N. In the statement, Shireen Mazari blamed the PCB chief for being incapable to run affairs of country’s cricket board. “All those rewarded by Nawaz Sharif are tendering resignations one after another.

After Arsalan Iftikhar and Mustafa Ramday, Najam Sethi should also quit his office… Merit was ignored in his appointment as PCB chairman,” she said. Mazari demanded that the government should hold fair elections under PCB constitution to elect a new PCB chairman. – SAMAA