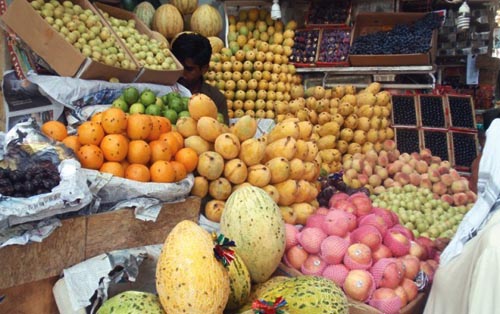 Ramazan is here and as per the trend, the prices of essential commodities have increased, in some cases by as much as 50 per cent. As demand for fruit rises due to the popularity of the fruit salad for iftar, so have the prices. The market committee officials, responsible for stopping profiteers and ensuring that the fixed rates are adhered to, diligently issue the price list every day, then switch off their phones and go home, satisfied with a ‘hard day’s work’.

The price list is available to each vendor and is provided daily. They, however, charge whatever they please, justifying it by saying that the quality of their goods is better than the rest.

A survey of the market shows that apples were priced at between Rs100 and Rs350 for every kilo gramme, depending on their quality. “American apples cost Rs350 per kilo gramme, the Chinese variety can be had for Rs250 per kilo and the Pakistani ones are available for a mere Rs150 per kilo,” explained a shopkeeper, pointing one by one towards the differing kinds. Before Ramazan, they could be bought for as little as Rs60 per kilo. Prices of other fruits are no different. The Egyptian orange now fetches Rs200 per kilo, red grapes cost Rs500 per kilo, while Pakistani grapes are Rs300 per kilo.

As is usually the case with such situations, everyone is blaming everyone except for themselves. The vendors claim that the market officials are corrupt and that the wholesalers are the ones driving up the prices by charging them extra. The wholesalers claim that they stick to the price list and it is the vendors who don’t, and also blame the market committee officials of being lazy and inefficient. The market committee officials just provide the price list and feel that their work is done – switching their phones off so as not to be disturbed – and claim it is the wholesalers and retailers who are to blame if they do not follow the prices provided. “They take bribes from us and issue whatever rate lists we want them to issue,” claimed a vendor. Another said that sometimes the prices specified in the price list are lower than what they pay for in the wholesale market, meaning that adhering to the list would incur a loss.

On the other hand, the Sukkur wholesale fruit and vegetable market general-secretary, Shafiqur Rehman Kamboh, refuted the claims of the vendors that the prices are being driven up by the wholesalers. “The retailers are making an absolute fortune by selling fruits at exorbitant prices,” he said. “We usually sell tomatoes at Rs20 per kilo but the retailers sell it on at thrice that price, charging Rs60 per kilo.” The wholesalers want to stop the middleman from charging so much, said Kamboh, adding that they want to establish a ‘Sasta Ramazan Bazaar’ in the city centre, where fruts and vegetables will be available at farm prices. “We will be holding a meeting with the deputy commissioner to discuss this,” he said. “We are ready to provide whatever relief we can to the people during the holy month of Ramazan.”

Kamboh was also unhappy with the market committee. “We start selling vegetables and fruits in the wholesale market at around 5am, but the market committee officials don’t show up before 11,” he said. “How are we to know what prices to sell the items at for the six hours that we do not have the price list? If they are sincere with their duty and to the people, then they should visit the market earlier to provide rates when we open up shop.” The market committee’s chairperson, Abid Gul Mahar, and secretary, Nisar Odho, were unavailable for comments as their cell phones were switched off. –tribune

Govt Claim of ‘No Foreign Aid’ to IDPs Dented