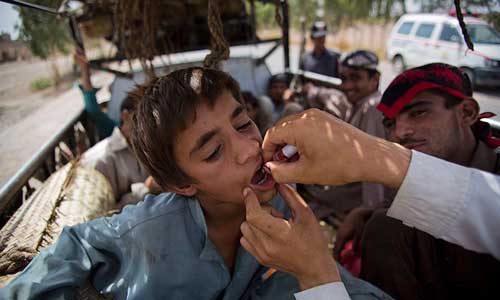 Over 375,000 children displaced by the military operation in North Waziristan have been administered anti-polio vaccine at different transit points. About 800,000 people have moved out of North Waziristan and taken shelter in camps set up in Bannu. A large number of IDPs are also living with their relatives in Khyber Pakhtunkhwa, Punjab and Sindh.

An official at the Prime Minister’s Monitoring and Coordination Cell for Polio said there were nine permanent transit points and IDPs had to pass through these while going to settled areas. “Vaccination teams have been deputed at all points and they are administering polio vaccine to every child. Boys and girls of up to 15 years of age are also being administered polio vaccine,” he said.

“Vaccines are available and we are taking the operation as a blessing because if all children of Waziristan get vaccine, polio will be eliminated from the country,” he said. It may be mentioned that the anti-polio campaign could not be launched in the volatile tribal region over the past over two years. -dawn