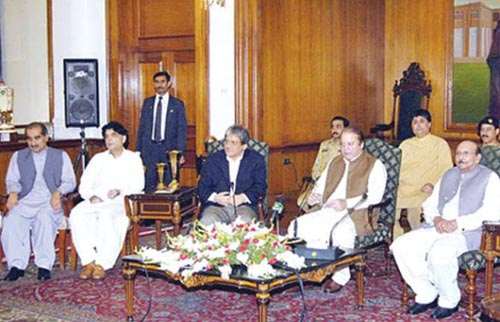 Prime Minister Nawaz Sharif has said he is unhappy with the Sindh government’s handling of the operation against terrorists and criminals in country’s biggest city. The prime minister arrived in Karachi from Islamabad early Thursday morning to preside over several meetings, the most important ones being those on development projects and the law and order situation in the port city of Karachi.

Presiding that meeting at the Governor House, Nawaz Sharif said they will not rest till Karachi’s status is restored to the “city of lights” as the city is the heart and economic hub of Pakistan. Only one out of 10 tasks assigned in the last meeting to the provincial government had been completed and that was to issue red warrants against proclaimed absconders, the PM observed at the meeting, which was attended by Federal Interior Minister Chaudhry Nisar, Chief Minister Qaim Ali Shah, Corps commander of Karachi, and other top civilian and military officials. The prime minister expressed his deep concern over the rise in targeted killings of police officials in the city. Nawaz Sharif was also not pleased with the provincial government’s indecisiveness over appointing a new provincial police chief.

He said they all have to work on war-footing to get rid of the menace of terrorism and in this regard the federal government will provide all possible help. The meeting also observed that provincial government failed to procure weapons, APCs and body armour for the police. Some of the participants also remarked the government was keener in transferring and posting police officials instead of focusing on the operation against militants, extortionists and kidnappers. Earlier, Sindh chief secretary and DG Rangers gave briefings to the PM on overall law and order situation in Karachi. Sindh Rangers DG Maj-Gen Rizwan Akhtar also presented a detailed report on the operation and crackdown against outlawed groups in Karachi. The PM was also briefed about strategic changes made to ongoing operation in Karachi. He was informed that changes were made due to Operation Zarb-e-Azb being carried out by armed forced against terrorists in North Waziristan.

Nawaz Sharif was informed targeted operation continues in sensitive and suburban areas of the city and action is being taken against terrorists and criminals. He was also informed that IDPs arriving in Karachi were being checked. The PM stressed for further improvement in intelligence sharing and devising a coordinated strategy to counter the possible reaction of terrorists over the military offensive in North Waziristan. The chief secretary said that the targeted operation is going on in the right direction as target killings have decreased. He apprised that 10,000 policemen have already been recruited and they will be trained. The prime minister advised that a joint plan should be devised by Sindh government, federal interior ministry and armed forces for training of these new recruits so they can effectively counter the menace of terrorism.

Karachi Corps Commander assured that army will provide full support and cooperation to Sindh Police with regards to human resources and technical assistance. He also assured the provincial government of the assistance of army in dealing with the influx of refugees from North Waziristan in the backdrop of the military operation and prevent the militants from entering Karachi in garb of IDPs. During the meeting on development projects, Nawaz announced federal government would fully fund Rapid Bus Transport System for Karachi which would be called “Green Line”. He said to ease the sufferings of the masses the Rs15 billion project, on the pattern of Metro Bus service at Lahore and Rawalpindi, would be started without any delay and completed in shortest possible time.

He further announced release of Rs55 billion for acquisition of land for Karachi-Lahore motorway and early completion of Gaddani Power Park as well as two other power projects at Port Qasim. He said the funds for the motorway have been released to the National Highway Authority and work would start in a few months time. “I know that expansion of Karachi has resulted in acute water shortage and we will resolve this issue on priority basis”, said the prime minister, as he announced approval of greater water supply scheme for Karachi wherein water would be supplied from Keenjhar Lake. The prime minister said that federal government will bear 50 percent (Rs6.5 billion) of the total cost of this project. -nation