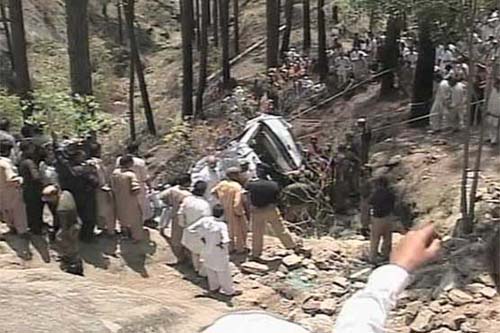 12 killed, over 20 injured as bus falls into ravine in AJK

At least twelve people died and 20 others sustained injuries on Monday when a passenger coach fell into a ravine at Pona area near Mirpur in Azad Jammu and Kashmir (AJK), officials said.

Rescue officials said that the incident occurred at Pona in Bhimber Tehsil in AJK, when a speedy passenger coach on way from Mirpur went out of control of the careless driver and plunged into a ravine, resulting in on the sport death of 10 persons at spot, while 20 passengers sustained injuries.

Local people of Pona village rushed to the scene before police and rescue teams reached on spot. The injured were shifted to DHQ Hospital Mirpur, where 2 more died taking the death toll to 12, while many among the remaining 20 injured said to be in critical condition which could feared more casualties. -nation

12 passengers killed as bus falls into ravine… by thetimesofpakistan