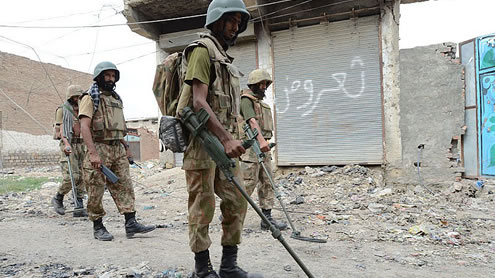 ISLAMABAD: Seven Uzbek terrorists and two army soldiers were killed during the clearance of the Miramshah to Datta Khel road, a military spokesperson said on Monday. However, this information could not be independently verified as journalists have limited access to North Waziristan. While the clearance was in progress, army troops carried out a snap operation on Uzbek terrorist hideouts in Datta Khel Bazar. A spokesman for ISPR stated that Naib Subedar Mashkoor and Lance Naik Zaheer were also killed in the ambush.

According to the spokesman, towns including Miranshah, Mirali, Boya and Degan, extending to Datta Khel have been cleared. However, the operation is currently in progress as there are pockets of resistance between Miranshah-Mirali, villages of Momin Gul Ziarat, Darpakhel, Tappi, Spalga and the south of Tochi river.

Furthermore, he said that a large number of IEDs and suicide jackets were recovered in the surrounding areas of Mirali in Shahbaz Khel, along with 75 Rockets, chemicals and propaganda literature. In Umer Ki Kalli, an additional IED factory was also discovered.

The military launched an operation in the restive tribal agency on June 15 in the aftermath of a deadly attack on the Karachi airport that left over 30 people dead. The military has said that foreign and local militants, including Tehreek-i-Taliban, Islamic Movement of Uzbekistan and Haqqani network members will be targeted in the offensive. – DAWN