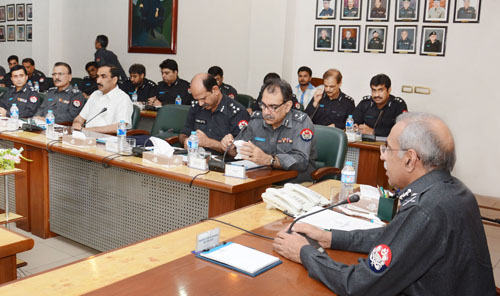 The Rawalpindi police have prepared a contingency plan to deal with any untoward situation that may arise as a result of the Pakistan Tehreek-i-Insaf (PTI)’s Azadi march and Pakistan Awami Tehrik (PAT)’s martyrs’ day.

The plan has come despite the fact that the police are facing day-to-day management issues which include reshuffling of some of its senior officers. Moreover, the police have not been conveyed whether the PTI will be allowed to march on Islamabad or not. However, according to the contingency plan, all the SPs will have a supervisory role in handling the security issues in their respective areas during the long march, a senior police officer said on the condition of anonymity. He, however, added that the police had been directed to keep their anti-riot gear ready.

The transfers and postings of some SPs at such a critical time is worrying the police, he said, adding the transfer of SP Syed Ali Mohsin Naqvi from the Special Branch to the Police College, Sihala, was a big loss to the intelligence wing. SP Rana Shahid of the Police Training School Rawat has replaced SP Naqvi while SP Dar Ali Khattak has been posted as the principal of the police training school Rawat. Mr Khattak had been transferred to the Central Police Office Lahore after the Raja Bazaar sectarian violence on Ashura last year.

He was the in-charge of the VVIP security at that time. SP Farhan Aslam has replaced SP Civil Lines Haroon Khan, who has been transferred to Chakwal. ASP Kahuta, Mohammad Jamil has been transferred to Attock after being promoted to the rank of SP while ASP Cantonment Circle Bilal Iftikhar is waiting to be transferred after his promotion. SP CIA Haroon Joyia is expected to be posted as District Police Officer within a few days while ASP Murree Tariq Elahi has been transferred to Raheem Yar Khan. Besides, the post of SP operation has been lying vacant for the last two months. -dawn