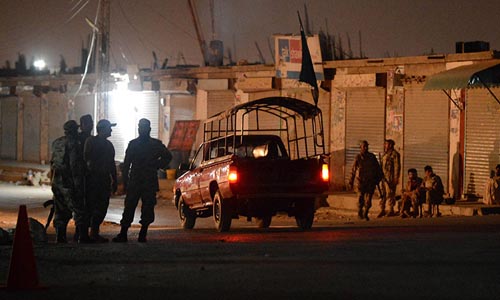 At least ten terrorists armed with assault rifles, hand grenades, and suicide vests were killed fighting with the security forces in seperate attacks on two airbases here on the night of Independence Day  in Balochistan.

Sarfaraz Bugti, the home minister of insurgency-hit Baluchistan province said that militants had tried to storm the Samungli airbase, used by Pakistan’s Air Force, and Khalid military airbase, both in the provincial capital Quetta, but had failed to penetrate either perimeter. Ten terrorists were killed in retaliation by security forces. “The target of the attacks were both the airbases but police and security forces thwarted the attacks,” he added. The airbases are some 12 kilometres (seven miles) apart in Quetta. Mohammad Amlish, provincial police chief told AFP seven security personnel including four police, and three soldiers had been wounded in the gunbattle but that police had managed to stop the militants from entering the Samungli airbase through a drain.

“We have recovered three dead bodies. Two of them detonated their suicide vests after being encircled by police while one was shot dead,” Amlish told AFP. A senior military official said rockets were fired at Samungli airbase, with two landing inside the perimeter fence. He said no damage was caused. Quetta city’s police chief Abdul Razzaq Cheema told AFP that militants first launched an attack on Samungli airbase before targeting Khalid military airbase around an hour later. Police had defused four bombs near the outer wall of Khalid airbase, he said. No group has claimed responsibility for the attacks but the Taliban have threatened a bloody response to a recent Pakistan military offensive against militants in the North Waziristan tribal region.

Pakistan launched the offensive in mid-June shortly after a brazen attack on Karachi airport that left dozens dead and extinguished a largely fruitless peace process with the Tehreek-e-Taliban Pakistan (TTP Later that month, gunmen opened fire at a plane landing at Peshawar airport in the country’s northwest, killing a passenger and wounding two crew members.  The Pakistani Taliban and the Islamic Movement of Uzbekistan claimed joint responsibility for the Karachi airport attack. North Waziristan has become a major base for the Tehreek-e-Taliban Pakistan, which rose up against the state in 2007, while the United States has long called for action in the area against militant groups targeting NATO forces in Afghanistan.

More than 500 militants and 27 soldiers have been killed in the assault so far, according to the military, though the death toll for insurgents cannot be independently confirmed. Impoverished Baluchistan is wracked by an insurgency waged by ethnic Baluch tribes seeking greater autonomy from the federal government and a greater share of profits from the region’s wealth of oil and gas resources. The region has also been hit by attacks blamed on Taliban militants. PAF Base Samungli is a Pakistan Air Force (PAF) airbase located near Quetta. Originally used as a forward operating location during exercises and wartime, it was converted into a main operating base during the 1970s. Samungli currently houses two PAF squadrons flying the Chengdu F-7PG combat aircraft. -SAMAA