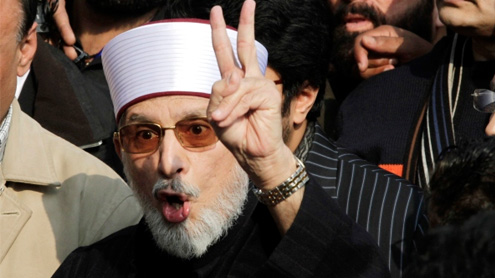 Won’t go back until revolution mission is accomplished: Qadri

Pakistan Awami Tehreek (PAT) chief Tahirul Qadri on Sunday vowed not to return from the capital until his “revolution mission” is accomplished. He opposed the imposition of martial law in the country but stuck to his demand that Prime Minister Nawaz Sharif and Punjab Chief Minister Shahbaz Sharif step down immediately.

Addressing thousands of diehard party workers, Qadri said, “The incumbent regime is the result of rigging and corruption”. He noted that Pakistan is rich in resources and can function without loans. Qadri reminded the government about the 48-hour deadline he gave on Saturday for the acceptance of his charter of demands. He said 24 hours have passed and only 24 hours remain at its disposal. At one moment, an emotionally charged Qadri stood up from his chair and asked the terrorists to kill him rather than murdering his workers. This act moved the crowd, and people, especially women, could be seen crying after this.

The fiery cleric also raised the slogan of “Go, Nawaz Sharif Go” which was repeated by his party’s workers. He accused the rulers of being involved in corruption. “The country’s survival will be in jeopardy if the Sharif brothers stay further in power,” the PAT chief said. Qadri labelled the current system brutal and ruthless, saying it is thriving on corruption and has failed miserably to give justice to the poor masses. “I want participatory democracy in the country and installation of a national government for democratic reforms, as the system cannot be changed without bringing revolution in the country,” he said.

He said that objective of his “revolution” is to make Quaid-i-Azam’s Pakistan and vowed to leave no stone unturned until achievement of that goal. “Change in the system is possible only through the success of revolution,” he noted. About the present economic condition of the country, Qadri claimed the rulers are lying about the country progressing in the economic field because the economic conditions are very bad. He also said that his ten-point economic agenda would bring prosperity for millions of poor countrymen. “Like the armed forces who have ended terrorism, we will put an end to economic injustices,” the Canadian national cleric said.

He asserted that the national exchequer can earn Rs1,000 billion by ending corruption. Qadri vowed his party would change the entire system of tax, saying it has a plan to stop Rs 20 trillion worth of tax theft. “Rulers have written off billions of rupees of tax. We will recover all taxes,” he said. “Annual earning to the national kitty from the country’s mineral resources can be two trillion and fifty four billion rupees,” he said. Rejecting the impression that he is in favour of imposition of martial law, the PAT chief reiterated his stance that he is against the imposition of martial law in the country.

“I would be the first person who would oppose the imposition of martial law,” he said and added that he is a democrat and likes democracy in the country. He censured the economic policy of the government and resorting to foreign and domestic borrowings and said that country has accumulated a Rs 12,000 billion external and internal debt. “Only Nawaz government borrowed Rs 11,200 billion loan in just eleven months,” Qadri said. -dailytimes

US Police Clash with Ferguson Protesters