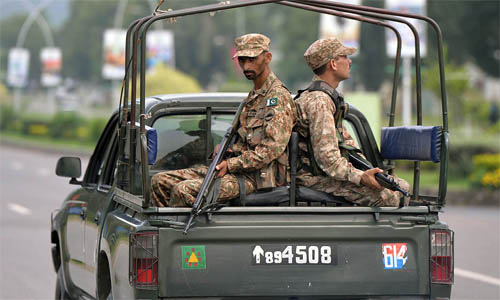 As twin protests in Islamabad entered a fifth day on Tuesday, the Pakistan Army has put its troops in Islamabad on ‘high alert’. Fearing any untoward incident taking place if the PTI or PAT enter the Red Zone, Lieutenant General Qamar Bajwa, commander 10 corps, has contacted top officials of the Islamabad Police for coordination to ensure security of the key government installations located along Constitution Avenue.

The troops were deployed in the federal capital under Article 245 of the Constitution. The government had taken this controversial measure for securing Islamabad amid the spectre of a political showdown. The army is however not bound to act in aid of the Islamabad police in the enforcement of this section unless Chief Commissioner Islamabad orders them to do so. In an earlier report, a military source put the number of troops stationed in the capital for security duties at about 350. But the city administration had told reporters that five army companies — over 500 soldiers — had been deployed.

Imran Khan said on Monday he would lead protesters into the capital’s “Red Zone”, an area home to Western embassies and key government ministries. Police have estimated the number of people at the protests at around 55,000, including many women and children. The government has previously said protesters are not allowed to enter the area. It is flooded with riot police and paramilitary forces and cordoned off with shipping containers and barbed wire. The government has not said whether Khan would be able to proceed to the Red Zone or not. PAT Chief Tahirul Qadri has said he will meet his supporters later today to consider whether to march alongside Imran.

Their protests have so far remained separate because the two have different supporters and plans for what should happen if Sharif steps down. On the political front, Leader of Opposition in the National Assembly Syed Khursheed Shah has also summoned a meeting of Pakistan Peoples Party (PPP) and allies parties in the parliament house to chalk out strategy to prevent Pakistan Tehreek-i-Insaf (PTI) from entering red zone and to end the political crisis peacefully. -dawn