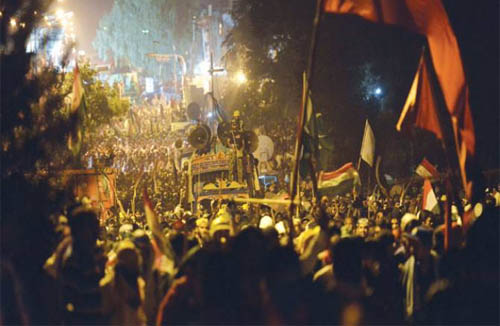 Thousands of Imran Khan and Tahirul Qadri-led marchers finally managed to enter the Constitution Avenue located in Red Zone of the capital, Islamabad, one after the other around midnight Wednesday, as both leaders vowed to stay entrenched in the area till Prime Minister Nawaz Sharif tendered his resignation.

The entry of the two charged march processions one after the other as they chanted anti-government slogans was made possible to the highly sensitive Red Zone through intense back-channel negotiations between march leaders and government earlier in day as intermediaries convinced the prime minister and his close aides to let the marchers in, and not to use any kind of force. The government immediately called in additional army troops to secure sensitive installations that lie across the Constitution Avenue, and handed over security of the Red Zone to army command.

Sources, meanwhile, said negotiations with the march leaders could kick start any time, and of need be, Army leadership could play an important role in the success of these talks if PTI Chief Imran Khan still refused to meet the Opposition or government committees or high profile personalities. Till date, both Imran and Qadri have avoided political personalities from within the present Parliament to initiate a formal dialogue.  The chance of Army playing an important role in defusing the political impasse was prompted by an ISPR release late Wednesday night which stressed all stake holders to immediately start the dialogue process to defuse the tensions.

As PTI and PAT interpreted the ISPR in their favour, and some quarters feared a looming military coup, government quarters thought of it as a warning to march leaders not to invade government properties including Prime Minister House. A top politicians involved in the government-PTI and PAT back channel contacts informed that everything could be on table including full audit of the last elections result, reduction of the present government tenure from five to mutually agreeable term, or even a date for fresh elections next year. He however ruled out resignation of the Prime Minister, brushing aside PTI leader Imran Khan’s threat to invade the Prime Minister House.

Meanwhile, Pakistan Tahreek-e-Insaaf leader Imran Khan made it clear on Wednesday night that his party would stage a sit-in on the Constitution Avenue outside Parliament House till Thursday evening, and he would be compelled to lead the crowd towards  Prime Minister House of Premier Sharif didn’t resign till that time. Earlier, the PTI Chief marshalled thousands of charged workers towards the Red Zone while he along with party leaders stood atop a specially built container.  Earlier , as he announced to march towards the Red Zone, Imran Khan vowed to make Constitution Avenue the “Tehrir Square” in front of what he termed as “fraudulent parliament” , but would  never enter  the “diplomatic enclave.”

Addressing charged and motivated PTI workers Imran Khan in his loud and clear message to the Prime Minister Nawaz Sharif said “no longer will the containers save your monarchy”, adding “till how long you will  you (Nawaz)sustain and maintain your kingdom while keeping the masses in dark and minting the money besides denting the national kitty. “Red Zone is a part of Pakistan and no one stop us from approaching there, he stressed.  “I am more concerned regarding the safety of diplomatic community while adding that they are our guests and no one will enter to the Diplomatic Enclave,” he maintained.

PAT chief Dr Tahirul Qadri severely criticized the opposition parties over their support for the ruling regime as he led his march and reached Constitution Avenue. To him, opposition in the Parliament had supported the government only to avoid its own accountability. “Soon I will expose this connivance between these political forces and that next three days would be very important in the history of Pakistan,” Dr Qadri told his followers. He hailed the ISPR statement, stating clearly they won’t seek Army’s mediation to resolve the current political impasse. “PAT workers will never enter or destroy any government building,” he assured. -nation