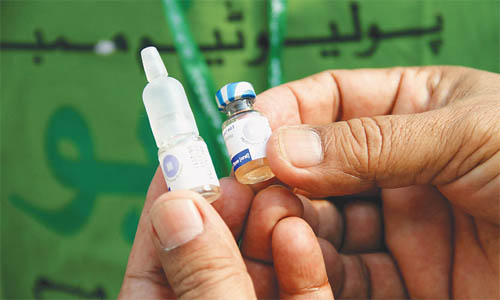 Emergency centre for polio eradication on the cards in Punjab

The Provincial Emergency Operations Centre (PEOC) for polio eradication is being set up in Punjab to make the province polio-free. The centre’s office will be established in the building of Directorate General Health Services Punjab while director general health has been nominated as the emergency coordinator.

It was decided in a meeting chaired by Punjab Secretary Health Dr Ijaz Munir at Civil Secretariat on Tuesday. The meeting was informed the PEOC would monitor and ensure achievement of the targets of the National Polio Emergency Plan. The centre would also strengthen district polio control rooms besides ensuring coverage of anti-polio campaigns and improving routine immunisation programme.

It would collect and evaluate the data as well as monitor immunisation activities. This centre would also coordinate with the provincial health department in collecting the data of the internally displaced persons (IDPs) and immunisation of their children. The officials of WHO, Unicef, Rotary International, Melinda Gates Foundation and EPI wing of the health department would perform their duties at the PEOC and would be responsible for social mobilisation, advocacy, surveillance, capacity-building, training, reporting of high risk population and data analysis.