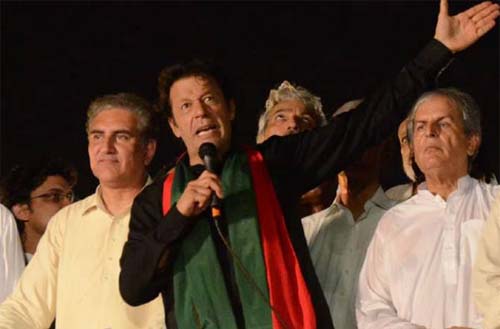 As the protest sit-in of Pakistan Tehreek-i-Insaf (PTI) entered its sixth day on Wednesday, party chief Imran Khan presenting his six demands to the government declared that PTI was ready to negotiate with the government but only after the resignation of Prime Minister Nawaz Sharif.

On the first day of its protest at the new venue – the roundabout in front of the Parliament House – a lower number of PTI activists was witnessed at the sit-in than on the previous days. Khan delivered his speech with a delay of almost two hours as part of the PTI strategy to pull a greater crowd. “PTI as a democratic party is ready to negotiate with the government but our first point of demands to start parleys is the resignation of Prime Minister Nawaz Sharif,” Khan said while standing at the stage installed at D Chowk of Parade Avenue in front of the Parliament House. The PTI chairman reiterated his resolve that he will not leave the protest venue until the resignation of PM Sharif. He said, “Listen up Mr Prime Minister, I will sit at this container for a year and sleep here as long I had to for getting your resignation.”

Imran Khan said their second demand was re-election after dissolution of assemblies; third, electoral reforms; fourth, bringing impartial caretaker set up with the consensus of all parties; fifth, resignation of all the members of the Election Commission of Pakistan (ECP); and last, to hold all those accountable under Article 6 of the Constitution who helped rig 2013 general elections. Calling the D Chowk as the Azadi Square and saying “we will celebrate our independence here”, Khan said that resignations should be tendered by all the members of Election Commission as transparent elections were impossible under the tainted election commissioners who helped PNL-N in rigging.
“They should themselves resign,” he suggested, adding that provincial election commissioner Anwar Meboob, who got printed thousands of fake ballot papers before the polling day, had fled the country.

He proposed that new ECP should be constituted after the consultation of all political parties and said those who rigged elections in connivance with Nawaz should be brought to justice. “As long as you will not hold the court people accountable, corruption could not be eradicated,” he said. When elections would be held under such a transparent system, a new Pakistan would come into being, real change would come out and real democracy would be established; only then would come real freedom, PTI chairman told his charged supporters amid ‘Go Nawaz Go’ slogans. Giving the rationale behind his first demand of PM resignation, he said how an independent inquiry regarding election rigging could be held when a person facing that charge was himself in command of all the affairs. “How (a transparent) inquiry could be held under Nawaz Sharif and which committee will hold Nawaz accountable,” he questioned from the crowd.

Reiterating that when the interior minister had said in the assembly that 60 to 70 thousand votes of every constituency were unverifiable then how election could be called transparent, he said. Khan said that in all 14 constituencies that had been opened for verification so far, around 40 to 80 thousand votes were bogus.
Branding Nawaz Sharif as Egyptian ruler Husseni Mubarak, he said that Mubarak got held such fake elections for 30 years and at last the people pushed him out. “People are now on roads and the nation has awakened, the cat is out the bag now,” he said and claimed that PTI would clean sweep in next elections. PTI chief said he wanted to take his supporters towards PM House but he took pity on Nawaz Sharif. He criticising the role of Leader of the Opposition in National Assembly and PPP senior leader Syed Khurshid Shah said, “I appeal to Mr Shah to become private secretary of Nawaz Sharif.”

Alleging that a fascist was hiding behind the innocent face of PM Nawaz Sharif, Khan asked who got attacked PTI rally in Gujranwala and now the house of vice chairman PTI Shah Mahmood Qureshi in Multan. He said that the tribunal probing Model Town killings had held Punjab government responsible but as soon as elder brother Nawaz Sharif was in power, Punjab CM will not go to jail.  Earlier in the day, PTI Vice chairman Shah Mahmood Qureshi and Secretary General Jehangir Tareen held a meeting with Pakistan Awami Tehreek (PAT) chief Dr Tahirul Qadri and discussed how their protests should be continued to exert pressure on the government to get their demands fulfilled. A core committee meeting of PTI was also held that unanimously formulated six point demands agenda. The committee decided that the protest would continue till their demands are met. A meeting of PTI Punjab parliamentary party was also held in Islamabad in which all the MPAs of PTI handed over their resignations to the parliamentary leader Ijaz Ahmed Chaudhry. -nation