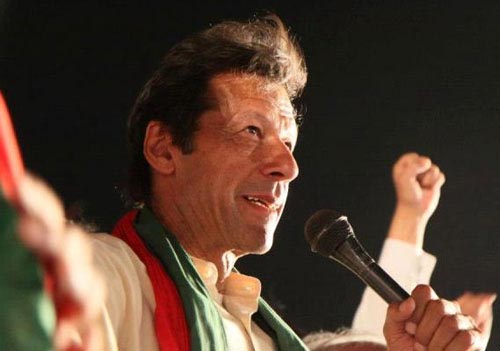 A visibly charged Pakistan Tehreek-i-Insaf (PTI) Chairman Imran Khan blasted the government, resorting to curses and threats while calling for a nation-wide protest. The PTI Chairman called on his supporters to expand the civil disobedience movement into all the provinces.

Imran threatened both the interior secretary and newly appointed IG Islamabad, warning that they should not think they would be spared. Imran Khan said he would personally take the new IG of Islamabad to jail if any of his supporters were hurt. “In my passion,

I may punch you!” the PTI Chairman said, adding that he would stay in the Red Zone, “for as long as I live”. “It is our democratic right to protest…we are not breaking any laws. I request the Supreme Court to have these containers removed so that life can return to normal,” Imran pleaded. The PTI Chairman also reiterated many points from previous speeches, including his principle demand: that Prime Minister Nawaz Sharif has to resign. -dawn