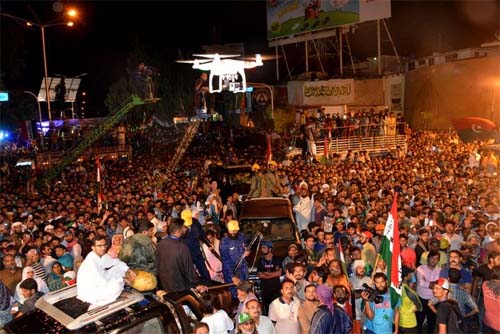 Pakistan Awami Tehreek chief Tahirul Qadri on Thursday termed the current rulers worse than Hitler and Mussolini and said the constitution has been ruined and there is no democracy in the country. Addressing his party’s workers and supporters, Qadri said the government is using “cheap tactics” against them, and claimed that 25,000 of his party’s workers are still missing.

He said that “atrocities of the rulers have reached their peak” and warned them not to try the patience of the people anymore. Describing what he sees as evils of the system, the PAT chief said no audit takes place in parliament of any member, rulers acquire billions of rupees of loans from the banks and never pay them back. He said millions of rupees are allocated to “fake representatives” in the name of funds, all of which is usurped by corruption. “It’s been 35 years since I have been living in a kanal’s house, while the ones accusing me of money laundering could not prove it despite being in power,” the cleric said. He said the rulers know “their looting will come to an end”, once a revolution came in the country.

He said that terrorists and burglars are ruling the state and added that those of his party’s workers killed in Lahore’s Model Town clash cannot be served justice in their presence, so they will have to return to their homes. Qadri vowed not to step back and alleged that the rulers plan to attack his residence. He said that those supporting Prime Minister Nawaz “are actually his partners in corruption” and they will be held accountable. Moreover, the PAT chief said “the people with fake mandate are beating the drum of fake democracy, while they are silent at the suspension of the constitution and the law”. Tahirul Qadri said the government had set the worst example of unconstitutional and undemocratic behavior by placing containers everywhere in the federal capital.

“The government has issued a notification for not providing tents to the marchers,” he claimed while addressing the participants of his “Inqilab March”. “Whoever is providing us tents is being arrested by the government,” he stated, adding: “Nawaz, his government and their barbaric officers have put containers everywhere and not one person can enter or exit the Red Zone.”  He said that the protesters are on the roads in heat, and the government is not allowing the PAT management to bring tents for providing shelter to the demonstrators. He said that not even a single vehicle could come in as containers have been placed to block all the routes. The PAT chief said he would “take revenge” for the killing of his workers.