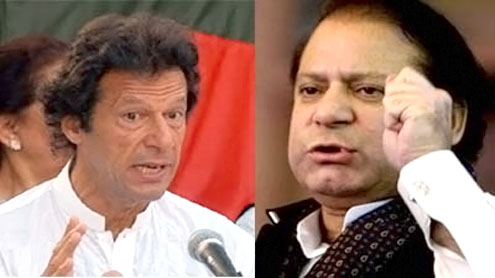 The federal government has reportedly expressed its willingness to consider PTI chief Imran Khan’s most pressing demand – the resignation of Prime Minister Nawaz Sharif – in a key development that may pave the way to end the current political stalemate.

According to sources, the ruling Pakistan Muslim League-N (PML-N) leadership has considered veteran politician and PPP leader Khursheed Shah’s proposal that government should hold out some assurances to Imran Khan about Prime Minister’s resignation. The government has been refusing to consider Khan’s key demand, but sources, said the ruling clique is now willing to hold dialogue with the chest-thumping PTI chairman on his foremost demand.

However, the government has reiterated that the matter of Nawaz Sharif’s

[contentblock id=3 img=adsense.png]resignation would be left to a government-formed judicial commission which is tasked with investigating the alleged vote fraud. Sources say country’s all-powerful military has signaled to play its role as a guarantor for any agreement that may be reached between the two sides. It has been suggested by several parties including PML-N that PM’s resignation demand can be entertained once the judicial commission in its findings holds Sharif responsible for rigging – a condition set by the ruling party for prime minister to quit his office.

Imran Khan has refused to accept judicial guarantee in election dispute with government, blaming former chief justice for playing role in vote rigging. The two sides may resume talks today through their mediators in Islamabad where PTI and PAT protest outside the parliament entered eight day amid demand for removal of the government by tens of thousands of supporters of Imran Khan and Dr.Tahirul Qadri

1) No negotiation until Nawaz resignation
2) Reelection under new electoral reforms
3) Introduction of electoral reforms
4) Caretaker setup should be independent
5) All election commissioners quit immediately
6) May 11, 2013 vote fraudsters must be punished. -Samaa

For the second time since it mobilised thousands of supporters for anti-government protests in Islamabad, tensions appeared to be easing on Friday as the Pakistan Tehreek-i-Insaf (PTI) prepared to initiate talks with the government. Following a meeting of the PTI’s core committee today, senior leader Shah Mehmood Qureshi told reporters in Islamabad that his party was now ready to engage in negotiations with the Pakistan Muslim League – Nawaz (PML-N) led government. Qureshi said that the government had already started removing containers in Islamabad, while an FIR has also been registered against culprits who earlier attacked his Multan residence. He said that he will soon contact Governor Punjab Chaudhry Mohammad Sarwar to further play his part in facilitating the talks with the government.

The developments Friday came shortly after PTI lawmakers submitted their resignations from the National Assembly. The party, which leads the provincial government in Khyber Pakhtunkhwa, has been engaged in protests and sit-ins against the Nawaz government over alleged rigging in the 2013 general elections. The PTI is demanding electoral reforms and a change in the election commission, and the resignation of the prime minister. Following the party’s core committee meeting, television channels quoted PTI leader Naeemul Haq as saying that it was possible that the prime minister could depart on a long leave until a probe into electoral rigging is completed. Haq said that the core committee discussed matters in detail with legal advisors.

Alvi said that “another window of negotiations” had now opened and that the government should seize the opportunity otherwise the impasse might linger on. The ball is in the government’s court, and I urge the government to look into our demands seriously,” he said. The two sides are expected to meet for talks later tonight, he said. Meanwhile, Jamaat-i-Islami (JI) chief Sirajul Haq told reporters in Faisalabad that things were looking brighter now and that there were chances that issues might be resolved through dialogue. He urged National Assembly Speaker Sardar Ayaz Sadiq not to accept resignations of PTI MNAs. -dawn

IS offered to Swap Aafia Siddiqui for James Foley