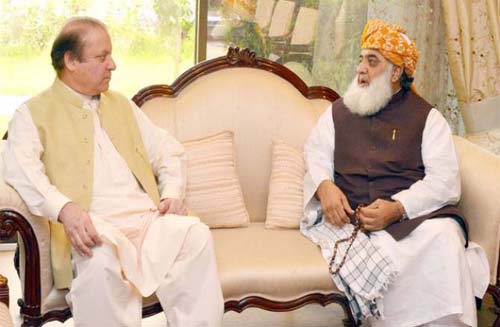 Govt trying to save faltered dialogue

Sources aware of the developments taking place on this front informed that Prime Minister Nawaz Sharif was himself dealing with the crisis and besides taking input from the team members who had separately held meetings with PAT and PTI negotiations teams late Wednesday night, he held meetings with senior political leadership and discussed various options to resolve the issue and manage peaceful dispersal of the demonstrators. Punjab Governor Ch Muhammad Sarwar, who is part of the four-member negotiation team which held talks with PTI, briefed Prime Minister Sharif and told him about the demands put forth by PTI leadership in the first round of talks held late Wednesday night at a local hotel.

Sources said that the foremost demand of PTI was resignation of the PM and Punjab Chief Minister Shahbaz Sharif, and no breakthrough could be possible in this regard because it was the unanimous decision of the ruling party that they would not accept any unconstitutional demand of the protesters. It was in this backdrop that a unanimous resolution from the Lower House of the Parliament was adopted with the efforts of other political forces in the parliament to give a loud and clear message that political elite was standing with the prime minister in this crisis and it strongly disapproved any unconstitutional way to wrap up the system.

JUI-F chief Fazlur Rehman also met with Prime Minister Sharif and both the leaders discussed the issue and the stiff stand both PTI and PAT leadership had taken on his resignation. Sources informed that Fazl advised PM not to accept any of the unconstitutional demand of both these parties. He urged him to force them to drop the demand of resignations of PM and CM but show leniency on rest of their demands regarding electoral reforms and revamping of Election Commission of Pakistan. PML-N sources informed that Premier Sharif also telephoned Pakistan People’s Party co-chairman Asif Ali Zardari and discussed the latest situation in the capital. They said Zardari was to stay in Dubai for a few more days but on the request of Premier Sharif he decided to cut short his visit and returned back Thursday evening.

He has also summoned the party meeting in Bilawal House Karachi to have fresh up session on the latest situation and to devise party’s role in the political imbroglio.  In a meeting in Dubai held a few hours before his departure for Karachi, the party came with a vague statement of standing by the democracy in the prevailing crisis and there was no overt support extended to the incumbent political dispensation, a source in the government said. Sources in the ruling PML-N informed that the party leadership had decided to mobilise their supporters and activists in all the big cities by holding public rallies and demonstrations in support of democracy. A party source informed that it was decided in the meeting held in Rawalpindi under the chair of Hamza Shahbaz Sharif that party would hold a big demonstration in support of democracy in historic Liaquat Bagh in a next few days with the aim to show their political strength. -nation