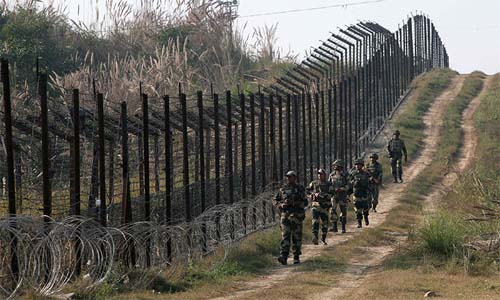 A Pakistani civilian was injured on Sunday when Indian Border Security Forces (BSF) resorted to unprovoked firing on a Pakistan Rangers’ posts in Jarwal sector near the Sialkot working boundary, military sources said. Pakistani forces responded to the shots as an intermittent exchange of fire took place with the use of heavy weapons along the working boundary.

There were also some reports that firing from across the boundary killed several livestock and destroyed some buildings in the incident. A day earlier, at least three Pakistanis including a woman were killed and 11 others were injured in Indian firing on villages along the Sialkot Working Boundary. The villages which were fired upon were Bajrah Garhi, Khadraal, Anula, Beeni, Sucheetgarh and Charwah. Officials accused Indian forces of targeting the civilian population with mortar shells and light and heavy machine guns.

Separately, Indian media reported that Pakistani troops allegedly targeted at least 25 Border Security Force (BSF) posts in Jammu and Kashmir last night. India’s army clashed with suspected militants in India-held Kashmir close to the Line of Control (LoC), leaving one soldier dead, a military official said. Soldiers encountered the militants who had crossed the de facto border into India-held Kashmir’s Keran sector, some 150 kilometres northwest of the main city of Srinagar on Saturday night, the official said. “In the resultant exchange of fire between army and terrorists, one soldier was injured who succumbed later (to his injuries),” defence spokesman Colonel NN Joshi said. Joshi said another soldier was injured in a different clash with suspected militants on Sunday morning in a nearby forested area.

The incidents come days after Narendra Modi accused Pakistan of waging a proxy war in Kashmir as he visited the town of Kargil to inaugurate two hydropower stations in nearby Leh and Kargil. During a period of one month, this is the 25th time that Indian forces have violated Line of Control (LoC) ceasefire.

Indian BSF soldier says he had ‘comfortable’ stay in Pakistan Previously, Pakistan had returned an Indian Border Security Force (BSF) soldier as a good will gesture a day after, authorities in Azad Jammu and Kashmir (AJK) had received the body of a villager killed by Indian troops along the Line of Control (LoC). -dawn