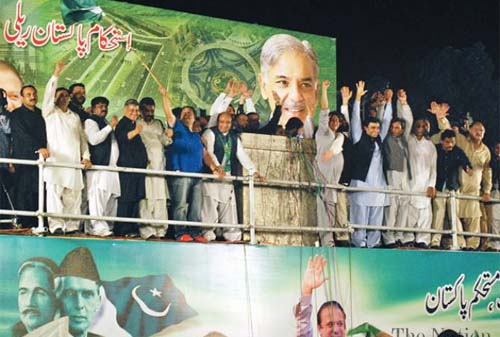 Addressing a rally against PTI and PAT in Lahore, PML-N leader Hamza Shahbaz has said that no one can demand resignation from Prime Minister Nawaz Sharif.  The Monday rally of PML-N started from Qurtaba Chowk and ended at Faisal Chowk, the intersection in front of the Punjab Assembly building.  Named ‘Istehkame Pakistan Rally’, it was a show of power against both Pakistan Tehreek-i-Insaf (PTI) of Imran Khan and Pakistan Awami Tehreek (PAT) of Dr Tahirul Qadri who are leading protest sit-ins in Islamabad. The PTI was the main target of the ruling party’s demonstration.

Hamza Shahbaz said the nation has rejected PTI Chairman Imran Khan’s politics of protests and all political parties in the parliament have rejected his unconstitutional demand of PM’s resignation.  Hamza, an MNA from Lahore, said the National Assembly has unanimously passed a resolution against the unconstitutional demands of the PTI, and he asked Khan to wait for 4 years (to take his turn). The young Sharif said his uncle Nawaz Sharif has a lion’s heart. “Imran Khan, you went as far as saying that Nawaz Sharif is a heart patient. Listen Imran Khan , Nawaz Sharif has a lion’s heart.” The PTI chief has repeatedly used foul language against Prime Minister Nawaz Sharif but “the PM has forbidden us to use similar language against Imran Khan in response,” he told a crowd that kept chanting anti-Khan slogans and calling him ‘a dog’.

The PML-N leader said that Imran Khan thought for 12 hours continuously but did not consult his party members and as a result, 11 members of PTI have formed a forward bloc.  Khan holds a musical show every night, Hamza told the participants of the rally many of whom performed bhangra on drum beats, and sang national and party songs. Horse dance and turban-clad groups of activists lent colour of a carnival to the rally at some points.  Hamza Shahbaz praised civil society, lawyers and trade unions for ‘rejecting’ Imran Khan’s call of civil disobedience. He criticised the protest rallies heavily and said that the PML-N will not succumb to any pressure. He said the protesters were unable to digest Pakistan’s economic progress. “Government is constructing dams and launching power generation projects for curbing the menace of load shedding.

We are working on Lahore-Karachi Motorway, Pak-China Economic Corridor and Gawadar Port,” he said. “Pakistan suffered a loss of 700 billion rupees due to the (PTI and PAT) ‘dharnis’ (small scale sit-ins)… Foreign diplomats are unable to move out of Islamabad… Sri Lankan president had to cancel his visit,” he said. A large number of security men were deployed and all roads leading to the PML-N rally route were blocked with barbed wires, screens and trucks which caused a serious traffic jam in and around the area of activity.  The Punjab capital is considered the political citadel of N-League where it won 12 of the 13 NA and 24 of the 26 seats in the last elections. Gathered from all over the city and outside, PML-N legislators, leaders and workers in thousands took part in the rally led by Hamza Shahbaz Sharif.

After October 28, 2011 Bhaatti Gate rally, it could be said the largest public gathering by the N-League in the city. Carrying national flags, party flags, huge size posters of the Sharif brothers, banners, placards and many wearing party flag dresses, the participants of the rally chanted slogans in support of Nawaz Sharif and Shahbaz Sharif and resolved to foil any plot against the democratically elected government. The workers in unison on the call of Hamza pledged to lay down their lives to save the Sharifs and fail attempts at ‘robbing’ the PML-N of their mandate. They also set ablaze effigies of Khan and Qadri. The rally was scheduled to come out at 3pm but due to large number of participants it could not proceed until around 7pm. Majority of the participants was on foot. A large number of women and children also took part. The one and a half kilometer track from the origin to the destination buzzed with slogans of the N workers.

Hamza Shahbaz Sharif strongly scolded Imran Khan for projecting negative image of country, inviting world attention unnecessarily, scaring away investors and forcing two presidents to cancel their visits to Pakistan.  He also said Khan’s ‘dharni’ has pulled back the wheel of progress and despite all that Nawaz government was observing patience. As to the resignation demand, he said no one can dare get resignation from Nawaz Sharif at gunpoint and added this surging sea of people stamps rejection of the resignation demand.  He posed, what kind of new Pakistan Khan was being created by making “our mothers and daughters” dance on the road. After the prime minister decision to set up a SC commission to probe the election, no justification remained for the dharna politics, he said while terming the PM’s offer magnanimous and fearless as “his hands are clean”. Hamza asked why not Khan found rigging in KPK and added he was cherishing a childish obstinacy to become the PM through a short cut.

The PML-N leader said Pakistan was fighting terrorism and facing IDPs and economic challenges which do not permit politics of agitation but demand unity of the nation. But Khan, he said, at this juncture was trying to create rifts. He invited Khan to come to the parliament to have his grievances redressed as well as share the government efforts to bring the country out of quagmire of problems and have the electoral reforms get through the 33-member parliamentary committee. In the same breath he warned if Khan continued to harp on the tune of PM resignation, the nation would hold him accountable.

He said if the trend of getting resignation at gunpoint is fashioned, no government would be able to run. PML-N City president Muhammad Pervez Malik, Punjab Minister Mujtaba Shujaur Rehman and Shaista Pervez Malik also spoke to the gathering. The speakers targeted Imran Khan who they said was out to overthrow an elected government through unconstitutional means. Pointing to the people they said this sea of people vindicates Lahore has rose up and given verdict against the resignation of the PM and the CM. They said the party workers were eagerly waiting for the permission from the party leadership to put up counter-show but they have been restrained and asked to exercise patience. -nation