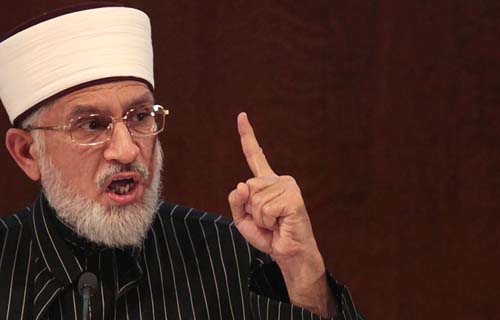 Pakistan Awami Tehreek (PAT) refuses on Wednesday to withdraw from its 48-hour deadline to the ruling Pakistan Muslim League – Nawaz (PML-N) government. Talking to media at Constitution Avenue, PAT leader Raheeq Abbasi said that the party will decide for any future course of action after the deadline expires.

Pakistan Muslim League – Quaid (PML-Q) chief Chaudhry Shujaat Hussain also went to meet PAT chief Tahirul Qadri in the latter’s container parked in Islamabad’s Red Zone. Shujaat went to meet Qadri along with two others whose names haven’t been disclosed. The development comes as the 48-hour ultimatum that the firebrand cleric gave to the government to meet his demands neared expiration.

It was not clear on whose behalf Shujaat, who had considerable trouble climbing into the container, was meeting Qadri. Qadri’s container was checked using sniffer dogs before the PML-Q leader climbed into the container. The move by PAT was expected especially after the judicial commission which was investigating the June 17 Model Town incident held the government responsible for it, saying the police acted on government orders which led to the bloodshed. -dawn