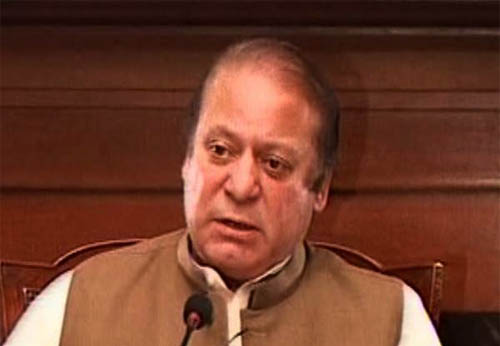 As criticism mounts over the government’s seemingly desperate move to involve the military in the ongoing political crisis, Prime Minister Nawaz Sharif told parliament that it was Tahirul Qadri and Imran Khan who requested a meeting with General Raheel Sharif.

Nawaz said he gave permission for the army chief to engage the two leaders and play the role of mediator. Nawaz’s reveal came after Interior Minister Chaudhry Nisar Ali Khan justified the military’s involvement as the only option out of the deadlock. Speaking on the floor of the National Assembly on Friday, the interior minister lamented that the protesting groups were unwilling to accept any other institution’s offered solutions. “These two groups did not trust the judiciary; they did not trust the opposition parties in this assembly; they do not trust lawyers, tribunals – if they do not trust anyone [but the army] what option did the government have?”

Let me make clear that this step [to involve army] was taken on a request by the protesting parties…the government allowed this facilitation, it should not be interpreted beyond that,” he added. Emphasising that the army was on the government’s side, Nisar claimed, “They [protesting parties] are using the army. They used the name of the army.” “This is not PTI or PAT’s army, this is Pakistan’s army. And instead of being in North Waziristan it is standing here [red zone]. And these parties [Pat PTI] have brought them here,” he said. Nisar Ali Khan did not mince words as he criticised elements “acting under the garb of democracy” whose agenda seemed to be “chaos” and “an overthrow of the political setup”.

The interior minister said the actions of these elements were not only “unconstitutional but irresponsible”. Declaring this time a “critical” moment in Pakistan and the parliament’s history, Nisar reiterated that the government had the backing of civil society and all political parties – barring one. “On one side we have the elected parliament, supremacy of the Constitution and law…and on the other we have the media and a few groups,” he said. “They want the system to wrap up. They have dug up mass graves outside Parliament and are wearing shrouds. They want their people to be killed,” Nisar stated, adding that he did not believe the Pakistan Awami Tehreek was a real political party. “This is not a people’s movement,” he said.