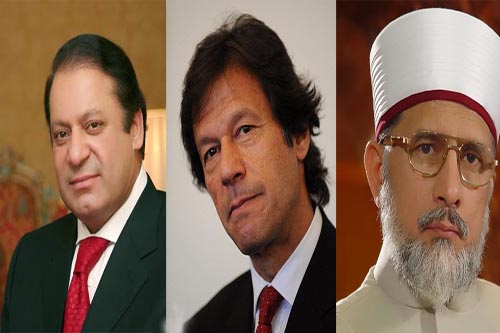 Jubilation was observed at the camps of Pakistan Tehrik-e-Insaf (PTI) and Pakistan Awami Tehrik (PAT) after the issuance of the press release at the end of Corps Commander’s meeting on Sunday. The statement was termed as an amiable step towards the fulfillment of their desires.

The special reporting cell of ‘The News’ has come to know that frustration was hovering all the day in the camps of both parties due to statement of PTI President Javed Hashmi on Sunday mentioning that Imran took decision of the attack on PM nawaz sharif House after getting a message. However, the statement of Corps Commanders meeting was minutely studied by both PTI and PAT. In the statement, sentences like ‘not to use force for the solution of problems’, ‘Pak Army will keep playing its role for the security of the State’, ‘use of force will further spoil problems’, ‘

The issues should be solved without wasting time’ were praised as both the PTI and PAT believed that such sentences were reflection of their stand. On the other hand, the government sources said that the Corps Commanders of the Pak Army had taken solid and realistic decisions which were in accordance with the stand of government. According to impartial commentators, the commanders have taken decisions keeping in their limit and reminded all the parties of their responsibilities.  -thenews