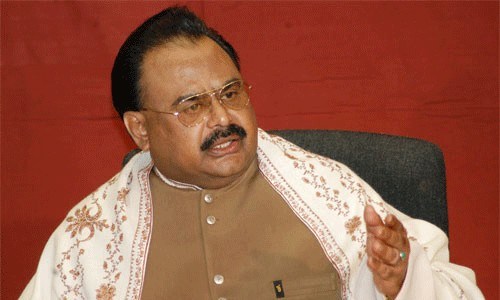 When asked if this move is a bid to express solidarity with the Pakistan Awami Tehreek (PAT), the official said no. Some channels reported that the MQM chief Altaf Hussain had ordered party members to submit their resignations at Nine-Zero, the party’s headquarters in Karachi. MQM members, who are attending the ongoing National Assembly session, are expected to submit their resignations to the convener upon their return to Karachi. An official from the MQM media cell said that the resignations were being gathered as MQM can no longer be a part of this corrupt system.

The resignations come at a time when the Pakistan Tehreek-i-Insaf (PTI) and Pakistan Awami Tehreek (PAT) are holding protests and sit-ins against the current political system and are demanding the resignation of Prime Minister Nawaz Sharif whose government they call the outcome of a rigged election. In his address on the floor of the National Assembly, Opposition leader Syed Khursheed Shah had also said: “I have heard a political party is pondering resignations… this will bring a storm.”

The MQM and PTI were at loggerheads when Imran Khan had held Altaf responsible for the killing of party leader Zahra Shahid Hussain who was shot dead on the eve of repolls after the May 11 election. PTI had also alleged that MQM was behind massive rigging in the NA-250 constituency, a seat which was later won by PTI leader Dr Arif Alvi after the MQM announced to boycott the repoll that took place in the said constituency. However, earlier on August 2, PAT chief Dr Tahirul Qadri had invited the MQM to join his ‘revolution march’ -dawn