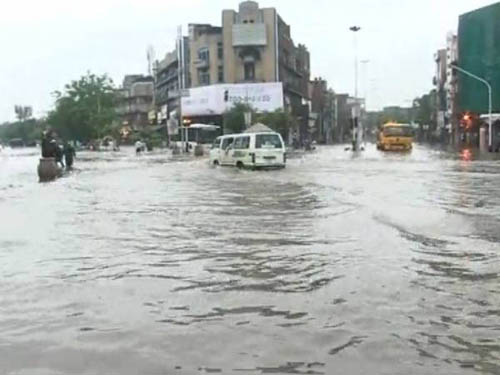 Fifty-two people, three soldiers among them, were killed and over 90 others injured on Thursday as torrential rain wreaked havoc in north-eastern Punjab and Kashmir, causing a very high flood in river Chenab. A number of cities received over 130mm of rain.

The Met department said the current monsoon system was likely to weaken on Friday morning, but till then it would continue to generate torrential rain. The system is likely to persist for another 48 hours. A peak of 467,000 cusecs passing through the Chenab at Akhnor (India) at midday was to enter Pakistan in the night. The Flood Forecasting Division (FFD) Lahore said it expected a discharge of 600,000 cusecs (very high flood) in the river at Marala at night. The water level in the river is expected to rise further over the next 24 hours, threatening low-lying areas of Sialkot and Gujranwala regions. There are also chances of spillovers or breaches at vulnerable places and high to very high flood in nullahs of Ravi and Chenab rivers in the Sialkot region.

The system generated very heavy rainfall – 8mm in one hour – in Indian Punjab and upper catchments of Jhelum, Chenab, Ravi and Sutlej rivers. But the Flood Forecasting Bureau said that two unfilled Indian dams over Ravi and Sutlej and Jhelum-fed Man­gla would absorb much of the rainwater. There was no immediate danger of exceptionally high flood in the three eastern rivers, it added. The FFD said the flow into Jhelum was 186,000 cusecs and expected to rise to 600,000 over the next 24 hours, but most of the inflow would be absorbed by unfilled Mangla Dam. Rescue 1122 said that 16 people, three women among them, were killed in Lahore as rain levelled houses in different areas of the city. Five people were killed in Faisalabad, six in Gujranwala, five in Sialkot, four in Kasur, three in Khanewal, two in Okara and one in Sheikhupura when roofs of their houses collapsed. The deaths in Kasur were caused by electrocution.

In Azad Kashmir, three soldiers and seven civilians were killed in landslides and flash floods which ravaged the mountainous region. According to the ISPR, Captain Fazal Wudood and soldiers Ghulam Mohiyuddin and Mohammad Suleman were killed in a landslide in Kehler Khurshidabad area of Haveli district. Gulshad Begum, Bashiran Bibi, Nasim Bibi and her daughter Sumayya and Fazal Hussain were killed when roofs of their houses collapsed in Kotli, Mirpur, Bhimber and Dariyan towns. In Dina, a man was killed and over 20 people were feared dead when a dilapidated bridge over Nullah Kahan collapsed. Over 24 people were on the bridge. Rescue workers saved three men alive and recovered one body. Several vehicles were washed away in the torrent. Rain in Lahore started on Wednesday afternoon and continued uninterrupted till Thursday morning. It inundated the entire city and exposed the Punjab government’s claim of having been prepared to meet the monsoon challenge. -dawn