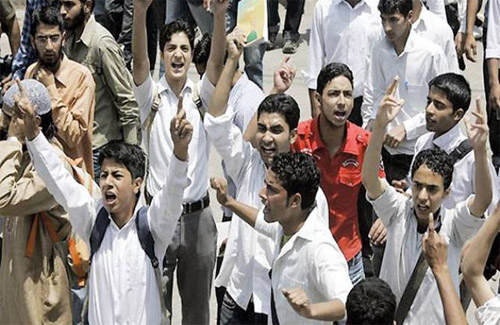 Dozens of students, some in uniform, and parents gathered in front of Islamabad Model College for Girls F-10/2 demanding opening of their schools. Thousands of policemen from the provinces brought in by the government to control protesters have been living in around twenty-seven schools and colleges for the past one month.

“Please vacate our schools,” the students chanted objecting why only twenty-seven schools and colleges were closed while all others were open and why can’t police personnel be accommodated in other buildings.  Parents expressed deep concern that their children languishing at home for the past four months.  [contentblock id=1 img=adsense.png]“The future of our children should not be put at stake for the sake of politics and police should be accommodated at some other place so that the classes can be started,” said one of the protesting parents.

The Capital Administration and Development Division (CADD) has written two letters to Interior Ministry and Islamabad Capital Territory Administration to get vacated twenty-seven schools and colleges accommodating thousands of police personnel as academic activity of these institutes suffered while other institutions were functional. But the Division has received no reply so far from the ICT administration and Interior Ministry regarding the vacation of these institutions. [contentblock id=2 img=adsense.png]Islamabad High Court has also directed the ICT Administration to get vacated schools occupied by the policemen from Punjab and Azad Jammu and Kashmir, and Frontier Constabulary (FC) personnel in a week and provide the security officials with an alternative place and submit a detailed report.

Thousands of security personnel had been called in the federal capital to control security situation in the wake of ongoing sit-ins by [contentblock id=3 img=adsense.png]Pakistan Tehreek-i-Insaf (PTI) and Pakistan Awami Tehreek (PAT) since August 14. They were accommodated in nearly fifty-seven schools, though, thirty educational institutions were vacated after requests by CADD but as many as twenty-seven schools and colleges are still occupied by the police personnel. -nation