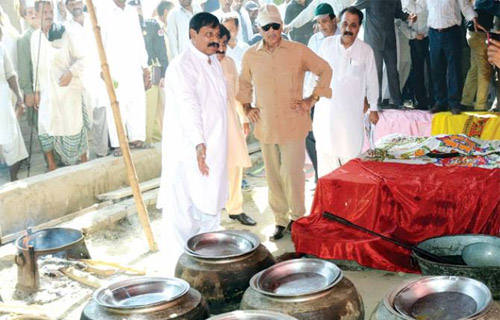 Chief Minister Muhammad Shahbaz Sharif has said that the conspiracy hatched by Imran Khan and Tahirul Qadri in London has been exposed.

Talking to the media during his visit to the flood affected areas on Thursday, he said those staging sit-ins in Islamabad have no concern with flood affectees and people will reject them in next elections.

Shahbaz said the nation is shocked over the postponement of the visit of Chinese President to Pakistan. He said people of Pakistan will take revenge from those responsible for postponement of the visit and the nation will never forgive them.  The CM asked Imran Khan that the entire Punjab is inundated and he should have shown courtesy by expressing sympathy with the flood affectees.  “Imran arranges music and dance shows in Islamabad but does not visit flood affectees, which amounts to rubbing salt on the wounds of the affectees”. He asked affectees to reject those in general elections who are celebrating Jashn when they are drowning in floods. He said money looted from Punjab is being spent on sit-ins and this is the same amount which former rulers had got by committing dacoity of billions of rupees in Punjab Bank.

He said people of Punjab will bury those in next elections who are showing apathy towards flood affectees. The chief minister visited flood-hit areas of Multan, Muzaffargarh and Rajanpur and reviewed relief and rehabilitation activities. He also visited relief and medical camps set up for affectees. The chief minister visited camp set up for affectees in Mochipura of Tehsil Shujabad. He mingled with the affectees and inquired after their problems.  Addressing flood affectees and public gatherings at Shujabad, Sher Sultan, Ali Pur and Kot Mithan, Shahbaz said Tahirul Qadri has exposed Imran Khan with regard to meeting at London. He said Imran has been saying till todate that he did not meet Qadri in London. He asked Qadri to tell about those people who had arranged this meeting. He said Pakistani people are aware of the fact now that this meeting was a part of a conspiracy and power projects were the biggest target of London plan.

The chief minister said despite lapse of one month, Canadian Qadri and Imran have not succeeded in their mission as London plan has been exposed and nation has become aware of all facts. Shahbaz said he paid nine visits to China and Chinese President was to lay foundation stone of many projects during his visit to Pakistan. He said Imran has done what even enemies cannot do. He said if someone else had been shown for 24 hours on television, he would have gathered 15,000-20,000 people in Islamabad.

The chief minister said that Imran hates poor people and wants to live among those who wear imported clothes, use costly perfume and have branded handbags. Shahbaz said claimants of new Pakistan have caused irreparable loss to the economy. Shahbaz said he daily holds a meeting late at night to review relief and rehabilitation activities in flood-hit areas and issues directions with regard to relief activities through video link.