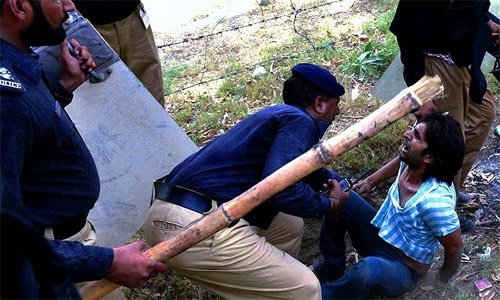 Declaring the arrest of Pakistan Awami Tehreek (PAT) workers unlawful, the Lahore High Court (LHC) directed the concerned authorities on Friday to apprise the court in written after releasing the arrested political activists.

A petition filed by the party of Dr Tahirul Qadri had challenged the illegal arrests of 56 workers.

During the proceeding today, the high court expressed annoyance over nonappearance of the Punjab home secretary. The additional home secretary appeared before the court in his place.

The court remarked that the Punjab government does not issue similar directives against hoarders and black marketers, whereas poor are detained without official orders in the name of disrupting peace. The additional home secretary requested the court to divert all such applications to him and vowed to take a brisk action on them.

However, rejecting the request, the LHC declared detention of the arrested workers illegal. The court also directed for apprising it in written after releasing the PAT workers. PAT chief Dr Tahirul Qadri, along with thousands of his supporters,

has been protesting against the governments of Prime Minister Nawaz Sharif and Chief Minister Shahbaz Sharif for more than a month in front of the Parliament in Islamabad. He has pledged to continue his sit-in until the entire political system in the country is revamped.