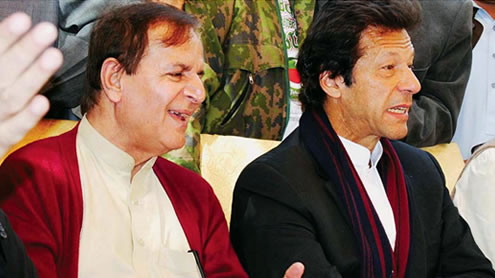 MULTAN: Veteran politician Javed Hashmi says he could participate in the Pakistan Tehreek-i-Insaf rally to be held in Multan if the party chairman Imran Khan invites him to the event.

“The people of Multan are waiting for Sheikh Rashid. He is an illiterate politician and did not change even a single word in his (scripted) speeches,” he said. He said the ‘Go Musharraf Go’ slogan could not make the dictator go for 10 years despite joint efforts of all political forces of the country, adding: “There would be no change even now because of Go Nawaz Go slogan.”

Mr Hashmi dubbed the PTI and PAT sit-ins at Islamabad as a conspiracy to end the political career of Imran Khan and his party. “Both Qadri and Imran Khan should end their sit-ins and go back,” he said. He said the government should increase the number of judges from three to five for the judicial commission that was being constituted on Imran Khan’s demand so that those holding sit-ins could be given ‘graceful exist’.

He said he had been stating even when he was in the PTI during the last seven months that the ways being adopted by the party would lead to disaster and was a conspiracy to end Imran’s politics. “Shah Mehmood and Jahangir Tareen are exploiting Imran Khan for their own vested interests,” he said, adding Mr Tareen who was challenging his party membership was himself PTI’s unconstitutional secretary general.

He said the ‘fight’ between Mr Tareen and Shah Mehmood Qureshi had intensified after his (Hashmi’s) return from the PTI container. Praising the PTI as a potent political force, Mr Hashmi said there were no chances of emergence of such a party in near future but the people from within the party had turned its future bleak.

He said NA-149 by-election would bring more respect for democracy, parliament, Supreme Court and army. He said if the PTI had not boycotted the by-election, it should issue party ticket and symbol to its candidate. “Why PTI has fielded its candidate as an independent hopeful,” he asked.

On the occasion, an independent candidate Siddique Ansari announced withdrawal of his candidature in favor of Mr Hashmi.

TAREEN: PTI secretary general Jahangir Tareen has said action would be taken against Javed Hashmi if he did not appear before the party’s disciplinary committee and responded to the show-cause notice served on him (Mr Hashmi).

“As per the party’s constitution, the rank and party membership of Mr Hashmi has been suspended and action would be taken against him if he did not appear before the disciplinary committee and respond to the show-cause notice,” he said while addressing a press conference at his residence here on Monday.

He said the party was being run on democratic lines and the statements of Mr Hashmi were regrettable. “He (Hashmi) used to praise Imran Khan and now he is criticising us,” he said. He said there was no restriction on paying taxes in the call for civil disobedience given by the party chairman Imran Khan.

“I have paid the taxes but I did not pay electricity bills,” he said.

Meanwhile, addressing a press conference at the residence of an independent candidate, Tariq Naeemullah, who has announced joining the PTI, Shah Mehmood Qureshi said PTI was ready for negotiations with the government.

“We were ready for the negotiations in past and we are ready for this even now. However, there is a contradiction in the words and actions of the government,” he said. – DAWN