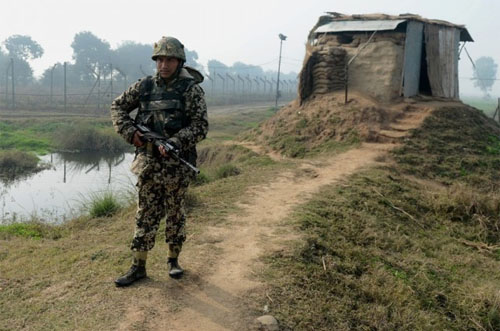 Senior Pakistani and Indian military officials spoke to each other on the hotline today and discussed ways and means to reduce tension along the Line of Control (LoC) and the working boundary.

“Contact was established today between Directors of Military Operations of the Pakistani and Indian armies,” a senior military official told.

The official said Pakistani army’s DMO conveyed the country’s concern to his Indian counterpart and pointed towards the neighbouring country’s consistent, unprovoked firing on the civilian population living along the LoC and the working boundary.  Today’s was the first ever registered contact between the two armies since tensions flared on the LoC and the working boundary. [contentblock id=2 img=adsense.png]

The latest skirmishes have continued nearly unabated for almost 10 days and 13 Pakistanis have lost their lives and 53 others have been injured. Fifty incidents of violations by Indian troops have been reported during the period with the latest happening in Nezapir Sector near Rawalkot. In 2013, the Pakistani and Indian DGMOs had pledged to uphold the 2003 LoC ceasefire accord in tact.

Since the Partition in 1947, the countries have fought three wars — two over Kashmir. Despite numerous military skirmishes, there has not been a full-blown war since they both tested nuclear weapons in 1998.