by ToP
in Featured, Pakistan
0 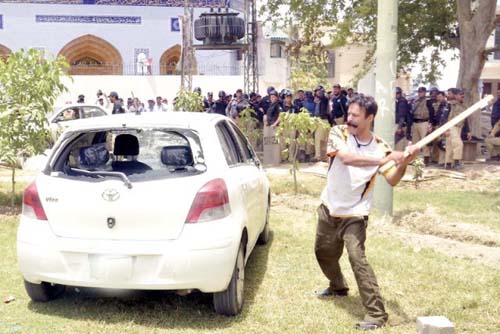 An Anti-Terrorism Court sentenced Gull Butt on Thursday to 11 years and three months in jail on vandalism charges in Model Town. Butt has also been ordered to pay a Rs0.1 million fine.

While speaking to reporters, Gullu Butt’s lawyer said they accept the court’s decision but will appeal against it. “Others responsible for the Model Town incident should be held responsible as well,” he added. Earlier, Butt, an active member of the ruling Pakistan Muslim League-Nawaz (PML-N), was sent on a 14-day judicial remand on the orders of the magistrate.[contentblock id=2 img=adsense.png]

Butt was caught smashing cars during the clash between PAT workers and the police outside the Minhajul Quran International Secretariat. He smashed windscreens and windows of private vehicles with his club, while police officials looked on and the vandalism continued unabated. On October 27, Butt denied charges of destroying public property and attacking police officials. -tribune