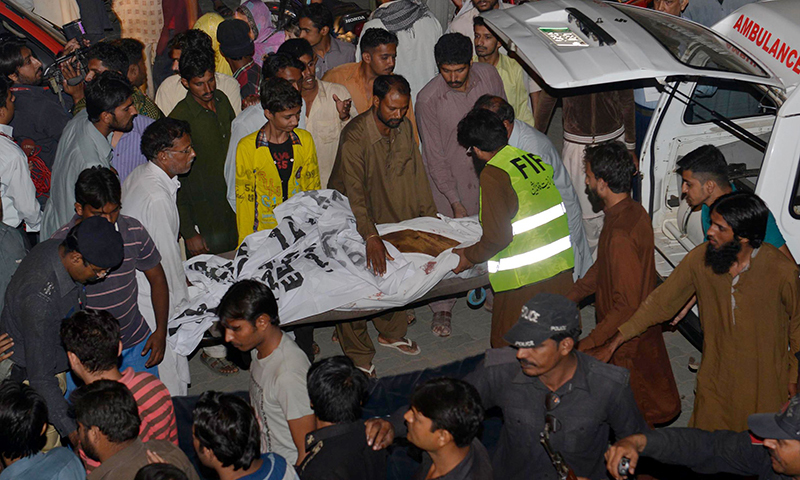 LAHORE: An explosion following the parade at the Wagah border on Sunday has left 57 dead while over 200 people have been injured in the attack. It is feared the death toll could rise.

IG Punjab has confirmed that the explosion was a suicide attack. Sources at the Ghurki Hospital have confirmed that 57 bodies have been brought to the hospital. Over 200 others were injured including 3 Rangers personnel deployed on security duty. Speaking to Geo News, IG Punjab Mushtaq Sukhera said, the suicide attacker approached the gate as the crowd was vacating the parade area where the flag hoisting ceremony is held. Emergency was declared at hospitals in Lahore, where injured and bodies were being taken. Families of the deceased and injured have begun gathering at the hospital where bodies are being kept in the open foyer due to unavailability of space.

Speaking to Geo News, one victim shared his loss stating that his father, two uncles, two aunts and his brother were killed in the attack while another victim said he lost five members of his family. DG Punjab Rangers Maj General, Khan Tahir Jawed, briefed journalists regarding the attack and confirmed that the attack took place 30 minutes after the parade had ended and crowds were vacating the area. He added that the crowd was moving towards the stalls and restaurants where the explosion took place. Jawed also confirmed that 3 Rangers personnel lost their lives in the attack while 5 were injured. He lauded the performance of his Rangers adding that if the attacker had gained access to the parade area the results could have been much worse.

Intelligence sources have confirmed they issued an alert regarding a possible attack at the Wagah border crossing. According to sources, they had intercepted intelligence to the effect last night (Saturday). Intelligence sources have also confirmed that Wagah border authorities were informed about the threat alert. Sources have also confirmed that security at the Wagah border had been increased and two new check posts had also been established.No parades at Wagah Border for 3 days: DG Indian Border Security Forces Director General Indian Border Security Forces has said that parades will not be held at Wagah Border for the next three days on the request of Pakistan. Tweets on Social Media:

Allah knows when was the last time I felt so sad and broken after hearing a news . WAGAH BORDER BLAST ! May Allah hv mercy on the deceased — Junaid Jamshed (@JunaidJamshedPK) November 2, 2014

Shocking news of the Wagah border blast. Very tragic.So sorry for the loss of lives.Can only appeal to Allah for mercy.Sincerest condolences — Fauzia Kasuri (@FauziaKasuri) November 2, 2014

Terrible. Several children among the dead in the terror attack.. At least 20 killed after blast near Wagah Border http://t.co/8a6sEJ1zZM — zahid Hussain (@hidhussain) November 2, 2014