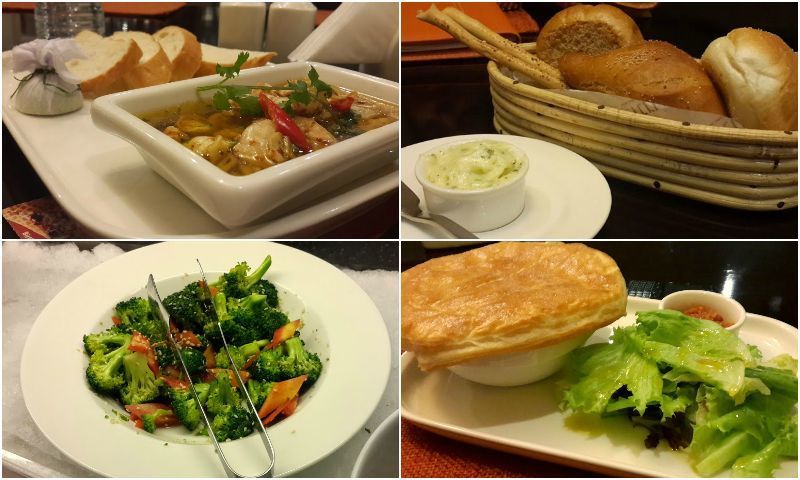 Citrus is a new restaurant that has opened up by the Kitchen Cuisine Enterprise in the Galleria Mall in Lahore.

Though situated inside a shopping mall, the restaurant is fine dining focusing on the use of fresh quality produce, along with ingredients from their very own herb garden. The first thing that one notices when walking inside the restaurant is the bold orange accents of the décor, from the crockery to the paintings on the wall. The contrasting dark wooden furniture is a reminder of chilly winter nights, with the bricklined bonfire in the middle of the restaurant echoing the same theme. Receiving a warm welcome from the waiter, we were seated at our table and served freshly baked bread with herb butter to start off our meal. The menu is a fusion of different cultures – the primary tilt is towards Mediterranean and Italian, but there’s a touch of other cultures through the ‘Middle Eastern Mezze Platter’, ‘Japanese California Sushi Rolls’ and ‘Burmese Khowsuey‘. We decided to order a mix of items from this around the world menu – gambas di ajillo from Spain for the appetiser, fresh fettuccine pasta with creamy pesto sauce from Italy, and chicken pot pie from England. It turns out that since the restaurant had just opened, a trip to the salad bar was on the house. Expecting the usual array of salad leaves with mayo based dressings, the salad bar at Citrus featured an array that would not just delight vegetarians, but even prove tempting for meat eaters. Laid out on crushed ice were bowls and platters of a mixed variety of salads from the basics to the complex with accompanying salad dressings and toppings. From simple ingredients like fresh, juicy tomatoes with tahini sauce, baby potatoes and broccoli to exotics like ‘Grilled Aubergine with Sweet Potato’ and ‘Zucchini with Mint & Almond’. To accompany the farm fresh vegetables and salty cheese, were toppings like caramelised walnuts, croutons and sun-dried tomatoes along with fresh baguettes. The thing that I loved most was a humble local ingredient – sweet potato or shakarkandi, thinly sliced and then crisped up to provide the most delicious crunch. Just as we had finished our salad course the appetisers arrived – gambas al ajillo or Spanish style garlic shrimp served with sliced bread and lemon.

This Spanish style garlic shrimp is a popular tapas item served with bread to soak up all the oil. The bread was baked fresh, and the squeeze of lemon was needed to cut the richness of the olive oil. The juicy, tender shrimps were cooked beautifully, with lots of garlic flavour, but a thick crusty bread would have been preferred to properly soak up the garlic scented oil in the dish. The mains arrived a few minutes later – the waiter had informed us in the beginning that the pot pie takes 30 minutes to cook, so the appetisers were spaced accordingly. Consisting of a beautiful golden puff pastry top, the chicken pot pie was a single crust pie instead of the traditional double crust. With a rustic top, the filling consisted of generous chunks of chicken and vegetables in creamy white sauce made from fresh chicken broth. The puzzling part about the pie was the construction – though the filling had the right flavour balance, it was too liquid to be eaten with a fork. In the end, it turned out that the best way to eat it was by cutting up the pieces of the puff pastry and then scooping up the creamy white sauce, like crackers are eaten with soup. Another odd point with the dish were the sides – though salad greens still worked, the spicy tomato chutney made no sense whatsoever. Thankfully, the pasta stayed true to its roots, with no desi fusion. Topped with fresh Parmesan, the fettuccine was cooked al dente; the pesto sauce was light and creamy, and the fresh basil could be smelt the moment the waiter bought the dish to our table. The moment my friend took her first bite, she declared it to be her guilty pleasure for when she wants comfort food. The total meal with drinks came up to about Rs1500 per head. With dessert included, the cost would be around Rs1700 per head making it comparable to similar fine dining restaurants in the city. Citrus lives up to its name with its use of fresh ingredients and bold flavours. The highlight of the meal was the salad bar, natural ingredients and showcasing of seasonal produce. The bright orange décor gives the restaurant a refreshing vibe and makes one want to sit down and have a relaxing meal in the company with friends and family. With lots of large open windows, the restaurant would be just the place to enjoy an office lunch or lazy Sunday brunch with the sunlight streaming in – the view from the top floor being an added bonus for diners.

The only issue – the width of the tables is large and the distance between two people sitting across one another makes it difficult to have a quiet conversation. Being under the helm of Kitchen Cuisine, there’s a lot of attention to detail that can be seen in the design of the décor and the ambiance of the restaurant, the variety of options in the menu and the conceptualising of the individual dish itself. But in creating a menu that is globally inspired with a local twist, there are some elements that inevitably don’t work. For e.g. the gambas could have done without an extra half cup of olive oil, and a traditional version of the chicken pot pie without the chutney would have been easier to eat. -dawn