Military Courts: How the Reluctant Were Brought Round 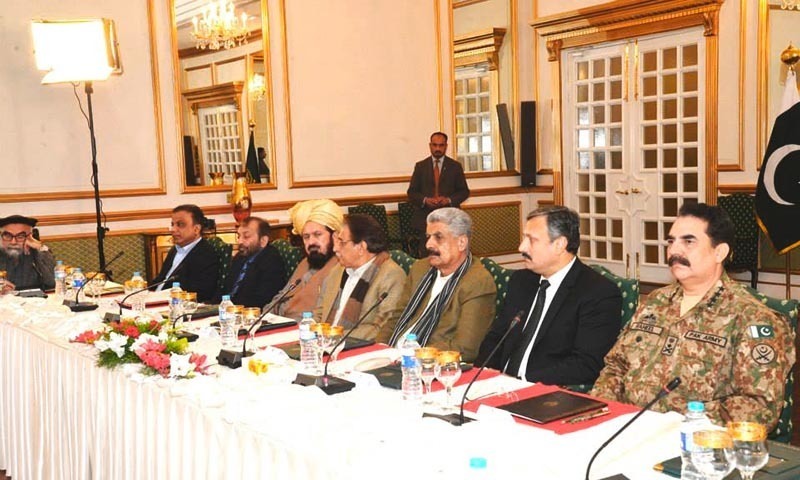 On an assurance by Army Chief Gen Raheel Sharif that only “jet black terrorists” who have committed violent crimes will be tried by the proposed special trial courts, reluctant parties like the MQM, ANP and PPP agreed to support the move. Addressing some of the reservations expressed by politicians, Gen Sharif explained that the military had its own legal system with certain checks and balances which guard against misuse of authority by the officers. Moreover, the army chief added, “the proposed military courts will only take the cases approved by the federal government”. Military authorities use the term, jet black terrorists, for hardened criminals. Sharing with Dawn proceedings of Wednesday’s marathon meeting of parliamentary parties, a participant who didn’t want to be quoted said that during an initial part of the sitting, the MQM expressed its discomfort over the prospect of military courts. The PPP and ANP, too, opposed the proposal. Senator Aitzaz Ahsan of PPP argued that such courts had no place in a working constitutional democracy.

Moreover, he said, the PPP had always opposed formation of such courts as the arrangement had no place in the constitution. It was Senator Mushahid Hussain of PML-Q who took the dissenting parties head on. Mr Hussain’s argument was that the late Zulfikar Ali Bhutto assumed the charge of chief martial law administrator in Dec 1971 because it was a need of the hour. “We have unprecedented circumstances now which call for unprecedented measures.”

Senator Hussain also recalled how anti-terrorism courts set up during the 90s and the recently promulgated Pakistan Protection Ordinance had failed to deliver. “Therefore we have to go for out-of-the-box solution,” Senator Mushahid contended, recalling that the US had also adopted similar measures after 9/11. Senator Rehman Malik, the former interior minister, however,

Enthusiastically spoke for the military courts, and according to a government source he also played a key role in convincing Asif Ali Zardari over a telephone call about the need for drastic measures. Syed Khurshid Shah, the Leader of Opposition, was also in favour of the move. In his remarks, Hasil Bizenjo said setting up of the military courts was being done by a democratically elected government through a constitutional amendment, not by a military dictator, therefore, “we should be rest assured, they will operate within given rules and regulations.” Aftab Sherpao also supported the decision. The PTI leaders, according to the participant, adopted a wait and see attitude. Once he realised that majority of the participants were in favour of the idea, PTI chairman Imran Khan came out in support of the proposal. However, Mr Khan suggested the government take immediate measures to ban all armed groups across the country regardless of their party affiliations.

Prime Minister Nawaz Sharif willingly accepted it. “If we do not set up special trial courts supervised by military officers, chances of extrajudicial killings will increase manifold,” was one of the arguments which were presented during the 10-hour long talkathon of the heads of parliamentary parties that eventually approved formation of military courts to try terror suspects. It was the MQM which throughout the meeting opposed the decision. The party’s main concern was that since it had suffered in the past because of such measures, it couldn’t support the suggestion. However, it was Prime Minister Sharif, supported by the army chief, who made several attempts to allay MQM’s apprehensions. -dawn