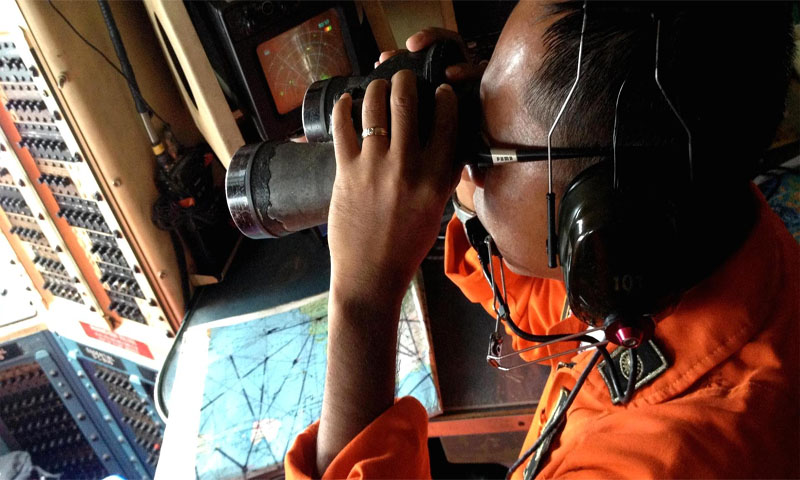 The search for missing AirAsia flight QZ8501 has expanded beyond the plane’s flight path, three days after the jet presumably crashed, Indonesia’s National Search and Rescue Agency chief has said. Henry Bambang Soelistyo said on Tuesday that the search area had widened beyond the islands of Sumatra and Borneo in the Java sea, as 30 ships, 15 aircraft and seven helicopters stepped up efforts to find the Airbus A320-200, carrying 162 people. Al Jazeera’s Scott Heidler, reporting from Surabaya in east Java, said the search teams were focusing on an area around 70 nautical miles from Belitung. Authorities expanded their search to 11,000 nautical miles, from Pangkalan Bun on the western part of Borneo island to the smaller islands of Bangka and Belitung. The focus of the search had previously been over the Java Sea, where there had been no confirmed signs of wreckage.

“Until now, we have not yet found any signal or indication of the plane’s whereabouts,” Soelistyo said. The US said in a statement that the USS Sampson, a guided missile destroyer which was already in the Western Pacific, will arrive in the area later in the day to join the search. “We stand ready to assist in any way possible,” Pentagon spokesman Mark Wright said. China announced plans to send a navy frigate and a military jet to help, while Australia said it was sending two more Orion aircraft to join in the search.

Flight QZ8501 went missing after air traffic controllers lost contact with the aircraft about 45 minutes after it left Juanda international airport at Surabaya in East Java at 5.20am on Sunday (22:20 GMT Saturday). Shortly before disappearing, AirAsia said the pilot of the plane had asked permission from air traffic control to change course and climb above bad weather in an area noted for severe thunderstorms. The plane’s disappearance comes at a sensitive time for Jakarta’s aviation authorities, as they strive to improve the country’s safety reputation to match its status as one of the airline industry’s fastest growing markets.

It also appears to be a third air disaster involving a Malaysian-affiliated carrier in less than a year, further denting confidence in that country’s aviation industry and spooking air travellers across the region. Malaysia Airlines Flight MH370 went missing on March 8 on a trip from Kuala Lumpur to Beijing with 239 passengers and crew and has not been found. On July 17, the same airline’s Flight MH17 was shot down over Ukraine, killing all 298 people on board.