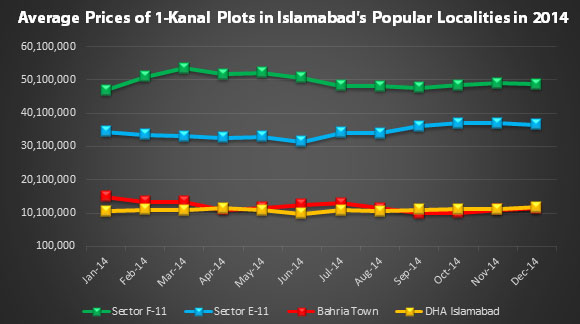 For Pakistan’s property market, 2014 was not as great a year as its predecessor. Property prices around the country had seen their first true boom in many decades in 2013, and many had expected 2014 to offer the same sort of returns.

This was not the case, the year 2014 proved to be slower and more stable, and dominated largely by correction as well as low activity as a result of political and security issues. At some points during the year, in and after Ramadan (the Holy Month of Islamic Calendar) as an example, the market even came to a complete standstill for a while. But despite its share of problems, 2014 saw pockets of excellent growth throughout as well as a stable finish. As 2015 begins, the prevailing opinion is that it is shaping up to be a better time for the real estate market of the country. What follows is a detailed analysis of the property markets of three major cities – Lahore, Islamabad and Karachi – and their performances in 2014. Lahore Cantt and LDA Avenue I performed well in 2014 and the average prices of 1-kanal plots in both localities rose by 15.89% and 24.19% respectively. In 2013, both had seen more controlled growth by comparison, gaining only 10.52% and 9.73% respectively.  For DHA Lahore and Bahria Town, the situation was quite the opposite. Both localities had a glorious 2013, gaining 31.60% and 39.30% respectively, but struggled to perform equally well in 2014. From January 2014 to December 2014, 1-kanal plots in DHA Lahore gained only 8.96% on average, while prices of same-sized plots in Bahria Town actually dropped 1.12%.  However, Bahria Town should have a good start to 2015, seeing as prices in this unique suburban development were on the up as 2014 came to a close. Lahore Cantt was the most expensive locality to buy a 1-kanal home in Lahore in 2014. With the average house going for Rs 35,806,610 and pulling in Rs 126,720 in monthly rent, the locality enjoyed a healthy rental yield of 4.28% in 2014. Please see the table below for average prices, monthly rents and rental yields for 1-kanal houses in Lahore’s popular localities.

The top five localities for plots in Lahore in terms of search volumes on zameen portal were:

The top five localities for homes in Lahore in terms of search volumes on zameen portal were: Islamabad’s property market had had a stellar 2013, but 2014 was fairly lukewarm by comparison. No major locality even came close to the gains experienced in 2013, and most registered controlled rises at best. Bahria Town, which had a spectacular 2013 that saw prices shoot up by an astounding 115.15%, was the only locality to experience an outright drop in prices – 1-kanal plots in the neighbourhood lost 22.79% of their value in 2014. Same-sized plots in Sector F-11 gained only 3.76% in value over the course of 2014 after having gained 46.06% in the preceding year.

Please see the table below for average prices, monthly rents and rental yields for 1-kanal houses in Islamabad’s major localities.

The top five localities for plots in Islamabad in terms of search volumes on zameen portal were:

The top five localities for homes in Islamabad in terms of search volumes on zameen portal were: The top five localities for plots in Karachi in terms of search volumes on Zameen were:

The top five localities for homes in Karachi in terms of search volumes on zameen portal were:

Given that 2014 has been a difficult year for a number of reasons, not the least of which is political uncertainty in one form or another, the market has shown remarkable stability. While it is fairly obvious that 2014 has been nothing like 2013, it has been far from a bad year. Although prices and market activity rose and fell in most localities around the country throughout the year, the market ultimately stabilised towards the end and some growth was seen in the last quarter in particular. “Prices cannot continue to rise unchecked forever, and every now and again we are going to see a more sobering year,” said Zameen Co-Founder and CEO Zeeshan Ali Khan. “I think the controlled growth in 2014 was a result of a correction following the perhaps unrealistic price rises in 2013, along with the uncertain political situation. But 2015 is going to be a better year in terms of activity in the property market of Pakistan, especially if the political climate – which has cooled down lately – continues to remain calm,” he added.