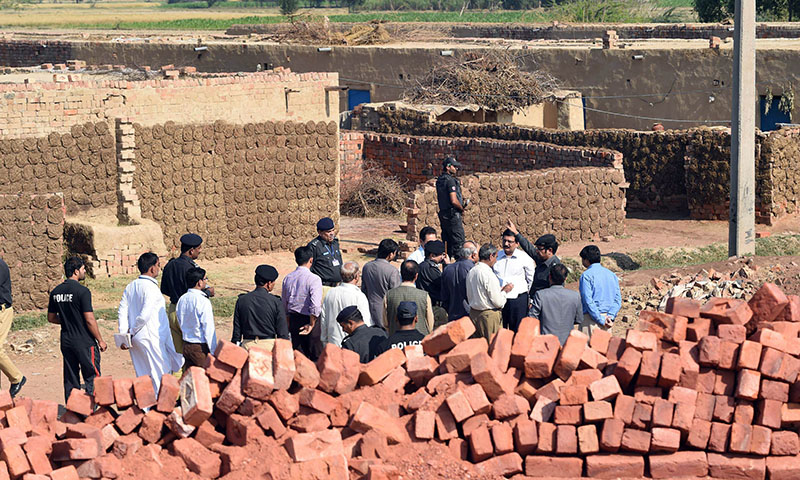 The Supreme Court on Thursday summoned Inspector General (IG) Punjab Mushtaq Ahmed Sukera, then District Police Officer (DPO) Kasur and Assistant Sub Inspector (ASI) for lax attitude and failure to protect a Christian couple that was lynched by a mob in Kot Radha Kishan on Nov 4, 2014. All the three police officers will have to appear before the apex court on Jan 29 with IG explaining what actions have been taken against delinquent police officers who did not even resort to aerial firing to disperse the enraged mob that had attacked and burnt the unfortunate couple. A three-judge Supreme Court bench headed by Chief Justice Nasir-ul-Mulk had taken up the tragic incident in which a mob in Kot Radha Kishan, some 60 kilometres southwest of Lahore dragged a Christian couple to a kiln and burned them to death over alleged blasphemy.

When the court was told that Jawwad Qamar, who was serving as DPO at Kasur when the incident took place had been transferred to the Counter Terrorism Department, the chief justice wondered how the officer will counter terrorism when he could not even save the couple who was attacked by the mob. The attention of the court was also invited towards an application submitted by Yousaf Gujjar, the owner of the brick kiln through his counsel Chaudhry Munir Sadiq alleging that the local police had converted this tragic incident into an opportunity to enrich themselves under the garb of efforts to trace and arrest unknown persons. Gujjar is the owner of the brick kiln where the tragic incident took place.

No necessary and available evidence were collected by the police such as video recordings, voice data of calls, call logs of mobile phones of the complainant, the application alleged adding the police was informed a day earlier about the incident of burning papers containing Quranic versis and the tension that was brewing in the area but no precautionary measures were adopted by the police to save the lives of the deceased couple. The court, however, ordered the police to collect call data of communications between Gujjar and ASI Abdul Rasheed made at the time of incident. Gujjar, who was arrested by the police and charged under anti terrorism charge, also stated that he was not attending the affairs of the brick kiln for being sick and infirm for the last ten days prior to the occurrence of the incident.

Besides Nov 3 and 4, was a public holiday due to 9th and 10th of Moharram and no one was present at the kiln including him. He pleaded that neither he nor his staff of the kiln had any role in the commission of the heinous crime. Gujjar contended that despite prior information, the armed police personnel played the role of accomplices instead of performing the duties to prevent the incident. The applicant also pleaded that he was arrested by the police from his house at village Marraka, 28km Multan Road Lahore on the basis of false and fabricated story as mentioned in the FIR. He also alleged that the malafides of the police was apparent from the fact that despite availability of the father of the deceased lady and brothers of the deceased Sajjad Masih, they did not make them complainant instead Sub Inspector Muhammad Ali become the complainant to save his skin and that of his fellow policemen.